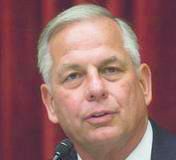 (Washington, DC) – On Friday, the House of Representatives voted to pass H.R. 5682 to approve the Keystone XL Pipeline. The bill passed with a vote of 252-161. Congressman Gene Green released the following statement in response:

“I’m pleased that H.R. 5682 passed the House of Representatives with overwhelming support, and it’s about time. The Keystone XL pipeline is the most scrutinized project in recent history; it’s become a political target.ÿ It’s a good thing we don’t build rail, highways, bridges or airports the way we are trying to build Keystone XL or we’d all be walking.ÿPipelines are like rail, roads, bridges, and airports, they tie our commerce together. America needs the KXL infrastructure to create a North American energy market and tie our energy markets together.ÿ We need the bill to pass both chambers, so that we can resolve this problem and focus on other important issues as we head into a new session of Congress.”