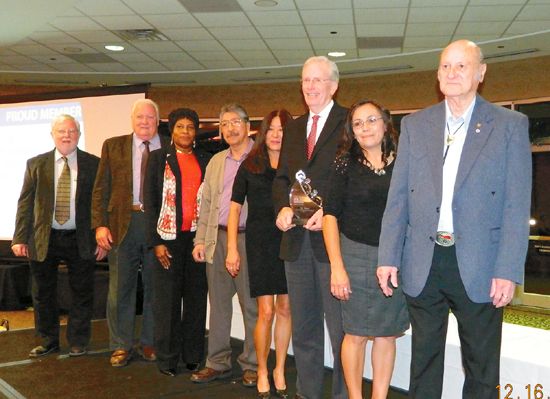 The event was held at the Greer & Lowdermilk Conference Center at Interwood in the district. The hundred or so guests and honorees enjoyed the banter of emcee Dr. Bennie Lambert, VP of Lone Star College North Harris.

VOLUNTEER OF THE YEAR, to Judy Hoya of the Aldine Education Foundation;

SPECIAL EAST ALDINE AWARD to Gerald Overturff, chairman of the East Aldine Board.

In presenting the award to the Explorers unit, Overturff remarked that “this is our future right here,” a tribute to the dedication of the deputies and young men and woman that are enrolled as Explorers and hope to eventually pursue a career in law enforcement and public service. Their advisor, Deputy Terry Garza, said that 3 of the Explorers present in the honor guard were students at MacArthur high school, and planned to go on to the marine corps. One of the Explorers has already jointed the Sheriff’s office as a deputy, she said.

The Public Health Award, to Jenny Varghese, is recognition for the new East Aldine program to promote healthy eating in the district, and to enroll restaurants locally to tailor their menus toward healthy choices.

The award to Houston Parks Director Joe Turner was for his work in preserving parkland and making more available to the public, and especially for this work in East Aldine’s Keith Wiess Park.