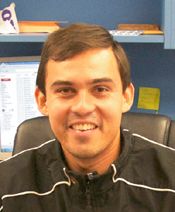 Aldine ISD Athletic Director Richard Delgado has announced that the Board of Trustees approved the hiring of two new head football coaches at their meeting of January 13, 2015.

Both men are looking forward to the challenges their new jobs present.

“I feel real good about this job and am excited for the opportunity I have been given,” Slater said.

“I’m very excited,” Kowalewski said about his first-ever head coaching job. “At my age, this wasn’t something I was thinking about, but my head coach at Ridge Point (Brett Sniffin) encouraged me to apply. I’m glad he did.”

Kowalewski said the Mustangs would run a spread offense and the 3-4 defense. “It’s (the 3-4 defense) what I coached at Ridge Point and it’s what I know and like,” he said.

Slater said the Cougars would feature a power running attack and play the 5-0 defense.

Slater spent the last nine years on a Katy staff that played in six state title games, winning three. He said he feels blessed to have worked under Gary Joseph, considered one of the best head coaches in the state of Texas.

“I learned so much from Gary outside of football,” Slater said. “The way he leads and how he worked. He doesn’t just want the football team to win, he wants all sports to win. In my opinion, he’s the best coach in Texas. That guy can coach.”

Kowalewski was part of a staff that earned three straight playoff berths at Ridge Point in its first three years as a varsity program. This past season, Ridge Point finished 12-1 and reached the third-round of the Class 6A playoffs.

Aldine’s new head coach has done a lot of research on the history of the Aldine High program, particularly former head coach Bill Smith, who won 237 games and led the Mustangs to the 1990 state and national championships. During Smith’s 29-year tenure at Aldine his teams were among the best in the Houston area.

Kowalewski has yet to meet Smith, but he’s hoping to do so in the near future. He has read plenty about him and has even picked up one of his trademarks.

“I haven’t met Coach Smith yet, but I know all about him,” the energetic Kowalewski said. “He is a great man. He felt it was important to eat lunch every day in the cafeteria with the kids and I’m doing that as well. It’s a great way to get to know all of our students and support our cafeteria staff as well.”

Both men are currently involved in their off-season programs and are looking forward to spring training when they can see their teams in pads.

And both are looking forward to the 2015 season.

“We want to establish a foundation where we can build tradition and success,” Slater said. “We want to build something that our students, faculty and the Nimitz community will be proud to be a part of.”

“Our goal in our first year is to make the playoffs, just like they (the Mustangs) did this past season,” Kowalewski said. “We also want to close the gap against our non-district competitors and give our other Aldine ISD teams a run for their money and be a tough out for everybody we play.”

Kowalewski is single and lives in the area.