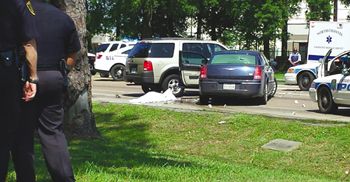 Pursuit travels from Eastex, to Beltway East, to Wallisville Road

HOUSTON – A suspect is dead after a police chase ended in a shooting Wednesday morning in the North Shore/Channelview area.

According to police, the chase started after Houston Police Officers were conducting an operation near Highway 59 and Crosstimbers when they observed a car making unsafe lane changes. The chase began after a patrol unit did a traffic stop but the driver of the blue Chrysler 300 refused to stop and chase ensued at around 10:40 a.m.

The suspect drove from the Eastex onto Beltway East, then south on the Sam Houston Tollway. Spike strips were used in an attempt to slow down the vehicle, but failed. The chase ended on Wallisville Road and N. Castlegory in Northeast Harris County where the suspect’s car crashed into a small white car. He then lost control and crashed his car into an SUV near the Wendell Ley YMCA.

Two HPD officers in pursuit exited their units and approached the suspect’s vehicle ordering him to show his hands. As the officers were approaching, the suspect got out of his vehicle, turned towards the officers, then reached back inside of his car.

The officers, believing the suspect was reaching for a weapon, and in fear for their life and those of citizens nearby, discharged their weapons into the vehicle, striking the suspect multiple times. He died at the scene and he has unofficially been identified by family as Frank Ernest Shepherd, III, a man 41 years old.

The female driver of the small white car was transported to an area hospital with minor injuries. The driver and passenger of the SUV were treated at the scene and released.

The intersection of Wallisville and Castlegory remained closed until late Wednesday afternoon.

North Shore Middle School and Havard Elementary were temporarily on lockout. Parents with children in those schools were able to pick up their children after classes.

The HCSO’s homicide unit, the Harris County District Attorney’s Office, and HPD internal affairs will take over the investigation. No officers were injured.