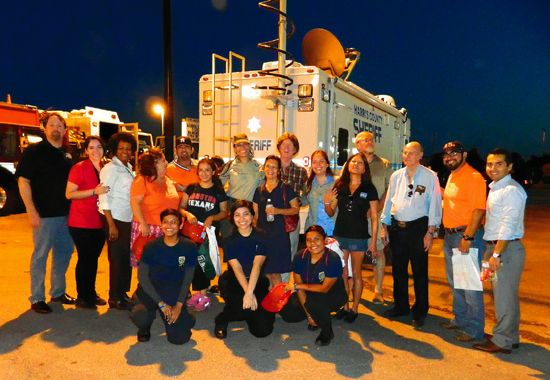 East Aldine District hosted a large event, with over 200 participants, in the parking lot in front of their offices on Aldine Mail Route. On hand were Lone Star College, Neighborhoods Centers Inc., Harris County Sheriff’s Office, Explorer’s Post 42, Westfield Fire Department, EMS #1, civic clubs, government officials, board members from East Aldine District and Aldine school district, and many more. 150 chicken sandwiches were provided by Chick-fil-A, and guests danced to music and toured the equipment displays and information booths from the various organizations.

In the Airline District, the Bellmar Civic Club and the Northline Terrace Civic Club held the event at the Holy Trinity Lutheran Church on Northline at Canino. Besides a “pot luck dinner” they had a raffle drawing and door prizes. Invited to their event were government officials, Congressman Green, Senator Sylvia Garcia, Rep. Arman do Walle, and Airlline Executive Director Teri Koerth. Also attending were Sheriff’s deputies, Little York Fire Department, and board members from the Airline Improvement District.

“Policing and public safety are community-wide efforts. I hope that this year’s National Night Out helps to strengthen ties between families, first-responders, and community institutions as we work together to build a crime-free environment for our children.”