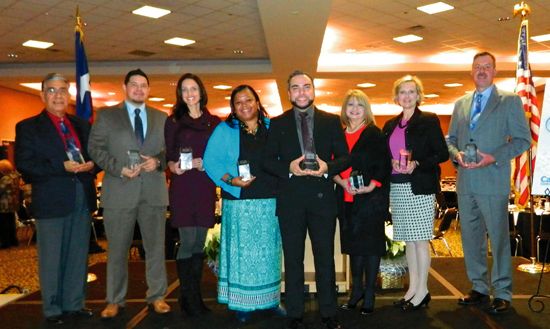 Recognition was given to eight strategic partners that work with the district to achieve their goal of improving the quality of life for residents of the district.

Master of Ceremonies for the evening was Lone Star College’s Bennie Lambert, assisted by East Aldine’s chairman, Gerald Overturff, and president David Hawes. Hawes gave a brief history of the district in his remarks, noting the success of income increasing 20% each year since its beginnings in 2001. He noted the help from officials such as State Representative Armando Walle and Pct. 2 Commissioner Jack Morman. He said that the district has achieved many of its goals, and “made a change” in Aldine. He said this was because the community works as a team, and so the awards recognize the partners.

Volunteer of the year, Cervando Castro;