The Davis High Falcons, under the direction of head coach Cornelius Mitchell, won the 18-6A title with a perfect 12-0 record and will open the playoffs against Langham Creek at 7 p.m. on Tuesday.

The game will be played at Cy-Springs High School. The Falcons will carry a 27-2 record into their bi-district contest.

The Nimitz High Cougars, under the direction of head coach Nathan Toon, finished second in District 18-6A and will face Cy-Ranch in bi-district play. That game will be played at Cy-Fair High School and will begin at 7 p.m. The Cougars will carry a 13-13 record into their first-round game.

The Aldine High Mustangs, under the direction of head coach Anthony Fobb, finished in third place in league play and will face Cy-Falls in bi-district. That game will be played at Langham Creek High School and will begin at 7 p.m. The Mustangs will carry a 17-10 season record into their bi-district contest.

The Eisenhower High Eagles, under the direction of head coach James Johnson, finished fourth in league play and will take on Cy-Lakes on Tuesday at 7 p.m. at the M.O. Campbell Educational Center. The Eagles will carry a 9-18 season record into their bi-district game.

“Establishing the chamber in the area again with the pillars of what the Galleria is known for such as the mall, polo club, and key restaurants and retailers, has been a top priority,” ICC President Reggie Gray said.

Members of both the ICC and the Galleria Chamber of Commerce receive the benefits given to both organizations, as well as access to global events and opportunities. The ICC is represented in 13 countries around the world including the U.S., Mexico, Panama, Malta, Italy, UAE-Dubai, Germany, Russia, Kazakhstan, Poland, Belarus, Ukraine and China.

Bill Pilkington, of Bentley, Bratcher & Associates, chair for both the north Houston and Galleria boards of commerce, has pushed the expansion of the ICC both in Houston and globally. Pilkington will pass the reins to Sidney Evans of NRG, the the chair-elect for the new board of directors for the Galleria Chamber of Commerce.

“The Galleria is such an important part of Houston’s identity and economy. I and others agreed it needed a chamber located in the heart of the community to focus on the businesses and people that drive the Galleria market,” Evans said.

Public Relations Specialist Judy Nichols will helm the publicity for the Galleria Chamber of Commerce, as well as serve as one of the board of directors.

The stand-alone Galleria Chamber was dissolved in 2013, however efforts have been underway to establish a stronger organization since Fall 2015 through a series of the membership events at the JW Marriott, HESS Club, the Double Tree Hotel, the Junior League, The Houston Polo Club, Capital Grille and Ruth’s Chris.

NORTHEAST – Plans have been revealed for reconstruction of the west end of Aldine Mail Route, from Burtcliff west to Airline Drive.

Aldine Mail Route is two lanes in one direction westbound, from Lillja to Airline. Hawkins Street, which has been a dead end, is now shown connected to Aldine Mail Route at Lillja, and will be two lanes carrying eastbound traffic. Thus a pair of one-way roads will carry the traffic, with two new connector streets.

These connector streets, two lane carrying traffic north and south, are named Aldine Heights, and Hawkins Heights. The project includes procuring land at the end of Hawkins Street, so that the news eastbound connection to Aldine Mail Route can be made.

Harris County Purchasing Department lists the value of the project at $5 million dollars, subject to final bids. Construction will start this year. 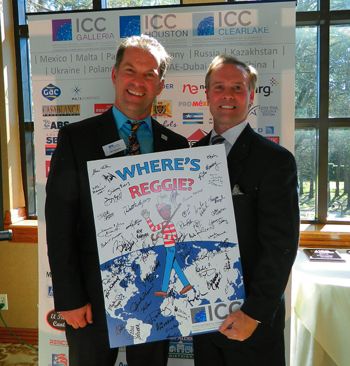 NORTHEAST HOUSTON – The Houston Intercontinental Chamber of Commerce held their annual Starlight Awards Gala last Thursday, as a luncheon. It was combined with a “Roast and Toast” for president Reggie Gray, on the occasion of the 30th anniversary of the founding of the Chamber.

It also was an opportunity to display the new logo for the Chamber, which consists of a stylized Globe, the letters ICC, followed by the location of each office, with two domestic and nine international sites.

Gray has made much of the conversion of the traditional local Chamber, once known as the North Houston Greenspoint Chamber, into an organization with an international focus, serving corporations with worldwide operations.

The luncheon was held in the elegant Northgate Country Club off FM1960.

The program consisting of swearing in a new board of directors, many of them hold-overs from the previous board, and new members representing the corporations now partipating. The swearing in was conducted by the director of the local FBI, Mike Anderson.

Also presented to the Chamber was a Recognition certificate from Congresswoman Sheila Jackson Lee, presented by her staff person, Booker Morris.

Awards were given to the following:

Ambassador of the Year, to Ross Thomas of Caldwell Companies;

Small Business of the year, to Darren Elswirth of the Woodlands Ad Agency;

Company of the Year, to Sidney Evans and Cathy McNair of NRG;

Business Partner of the Year, to Attorney Gordon Quan;

Volunteer of the Year, to Will LeBlanc;

Citizen of the Year, the John Zizelmann prize, to Sidney Evans;

It was announced that the Chairman elect for 2017 is Wendy Millhouse, Chairman Galleria Sidney Evans, and Chairman International Gordon Quan.