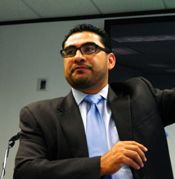 GREENSPOINT – Armando Walle, the State Representative for the Aldine and Greenspoint areas, was the featured speaker at the monthly Town Hall luncheon last Thursday at the ICC Houston Chamber offices.

Walle spoke on a wide range of issues, and attemped to preview the major concerns for the next Legislative session, that starts in January 2017.

He said that three important areas will be dealt with in the budget in 2017. These are Transportation, School Finance & Education, and Health Care.

Walle is on the Budget committee, along with 26 others representatives. He is also on a Federal/state relations committee. There are 150 members in the legislature, and his Democratic party is a minority with 49 members, versus 101 Republicans. There are 31 members of the Senate, he said, 20 Republicans and 11 Democrats.

Walle was first elected to office in 2008, and is in his 4th term. His District is 140. He is a native of the area, having graduated from MacArthur High School. He credits his education there, where he was “mentored to succeed.” Now he intends to pay that back, with service to his community.

The 2017 Legislature will have to deal with a smaller budget than this year, due to reduced sales tax revenue and oil and gas taxes. Last year the bienial budget was about $200 Billion, he said, and already the Governor has asked all departments to propose spending that would be 5% less. However, a separate ballot issue that passed last year, will provide the Transportation Commission with an additional $2.5 Billion for highways and other means of transport, and unlike previous years, 70% of this money is destined for urban counties, not rural.

Walle said that every session, about 7000 bills are introduced, and perhaps 1000 will become law.

Walle spoke about his concerns for those affected by flooding in April of this year. He praised the Aldine ISD and the city for opening shelters. He said the floods exposed those in the community that are vulnerable or poor, and regretted that landlords will be allowed to rebuild rather than remove flood prone properties.

He said that most people are not aware of the resources now being devoted to border security. The state of Texas spent $800 million last year on security forces, and the federal government has increased their budget by four times.

Walle praised efforts in the area to provide more educational opportunities, by Lone Star College and Aldine Early College high schools. He noted that “Education is Economic Development.” He said that although vocational training is good, and getting a lot of attention and resources, he was concerned that the new Lone Star College – North Harris to be built in East Aldine’s Town Center should have equal opportunities with Academic subjects and fields of study.

In a question and answer period that followed, Gerald Overturff of the East Aldine District asked about progress that TxDOT is making to extend Gulf Bank Road through Keith Wiess Park.

Reggie Gray, president of the Chamber, thanked everyone for attending, and announced that the fourth Chamber office, in Stafford, is now open. Additional offices are in Greenspoint, The Woodlands, Galleria, and internationally.