Do you support Trump's immigration policies?
Total Votes: 71
×
You or your IP had already vote. 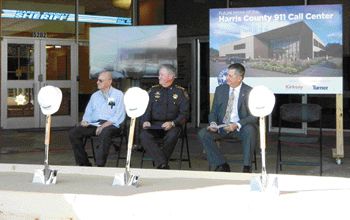 EAST ALDINE – The new state-of-the-art Harris County 9-1-1 Call Center will begin construction in the near future.

Master of Ceremonies was Harris County Judge Ed Emmett, who in his remarks praised the East Aldine District for their revitalization efforts in the area.

Overturff, who grew up in the Aldine neighborhood, noted how it had changed from his early years “running pig trails” in a rural environment, to an urban suburb today.

As if to emphasize the necessity for a call center for Emergency responses, the audience noted that in front of the ceremony, on Aldine Mail Route, there were two real Haz-mat operations, one a fuel spill from a dump truck, another a spill at a nearby gas station.

Sheriff Hickman noted in his remarks that “this new call center is of significance because it will be a brand new-state-of-the-art facility which will enable emergency communications employees to work more efficiently with Next Generation 9-1-1 emergency communications technology. The call center will service the unincorporated area of Harris County which answers approximately 1 million 9-1-1 and 500,000 nonemergency calls a year. It will also provide for a facility that will influence the way in which Public Safety Operations are supported for many years to come, as well as how we coordinate with nearby agencies, by sharing data and resources and solving problems together.”

This site will not only provide state-of-the-art technology, but also an onsite training module for all new employees. The facility will also be self-sustaining and will accommodate 24/7 operations during any crisis situation, such as a hurricane, flood, or terrorism event. Once online, the new call center will allow Harris County to keep up with the ever growing population in its territory.

The 9-1-1 call taking equipment is supported by Greater Harris County 9-1-1 Emergency Network (GHC 9-1-1), which administers the 9-1-1 infrastructure for 49 cities wholly or partially within Harris and Fort Bend Counties. This is the largest regional 9-1-1 system in the Texas and one of the largest in the nation. 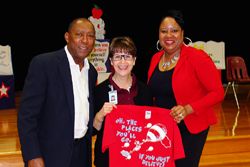 The Mayor also received a key to the school. Mayor Turner was the keynote speaker at the event and stressed to Harris students the importance of reading. “One of the reasons I am where I am today is because I love reading,” Mayor Turner said.

“I didn’t come from a wealthy family. When I was young I traveled the globe by reading. Let me encourage you to read. The more you read, the more life will become so much clearer. Do me a favor and read as much as you can.” Dr. Bamberg also addressed the students and the Harris Academy Choir performed, “I Believe I Can Fly.” Assistant principal Star Jones organized the event.

ITT students get help from LSC and HCC

The profit-chain company, blames the shutdown on the U.S. Education Department for prohibiting ITT from enrolling new students who use financial aid to pay for classes.

Students who missed the fair, could go to www.LoneStar.edu/ITTHelp for more information.

Houston Community College also has a link specifically for ITT students as its website says:

“HCC staff is working diligently to accommodate those ITT Tech students who are reaching out to HCC with questions about transferring to HCC. HCC advisors and financial aid staff are available to assist with any questions you may have regarding course transfer, financial aid and career advising. In order to better assist you, please visit www.hccs.edu/district/students/campaigns/help-for-itt-students/”

Congressman Gene Green (TX-29) released the following statement in response to ITT Educational Services, Inc. (ITT) announcing that it is closing all of its ITT campuses, including three in the Houston area.

“My biggest concern is for the nearly 1,600 current students in Houston and Harris County whose futures are immediately impacted by ITT Educational Services, Inc.’s (ITT) decision to not take corrective actions and instead close. The closure came amid increasingly heightened financial oversight measures put in place by the Department of Education over the past two years due to significant concerns about ITT’s administrative capacity, organizational integrity, financial viability, and ability to serve students. It was ITT’s business decisions that put its students and millions of dollars in taxpayer-funded federal student aid at risk.

“The majority of ITT students come from humble backgrounds and invest thousands of dollars in their education for a better future for themselves and their families. It is the job of Congress and the Department of Education to honor these students’ hard work and safeguard their financial commitment to their education. Most immediately, students have two basic options to choose between: 1. apply for a discharge or 2. transfer schools.

“Whatever students choose to do, it is my hope that they do not give up on their education. Restarting or continuing one’s education at a high-quality, reputable institution may feel like a setback today, but it is a decision that will pay off in the long run.”

Festivities included a luncheon cooked at the home and served by the FCCLA club of MacArthur High School. About 30 girls from the club helped serve food, and got to know some of the Seniors that live at Pilgrim Place, and some of the Grandparents that cam specifically for the event.

Food service was inside the home, but outside on the lawn, children played on several “jump houses” and grandparents socialized with others, and learned about social services from some of the agencies that set up displays under the tents.

The Grandparents Day event was under the direction of Coco Martinez, Resident Services Director, and Dimetria Wallace, Pilgrim Place Director.

The FCCLA club was headed by their president, Melissa Angulo.

Congressman Gene Green welcomed everyone, and spoke about services his office provided for seniors, the grey-haired type, and the college bound type. 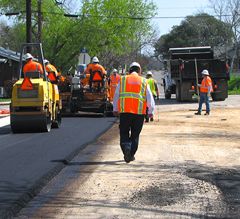 As part of an agreement approved by Houston City Council on August 31, 2016, Harris County Pct. 1 will pay for additional street improvements worth millions of dollars within the Houston city limits by year’s end. This is a continuation of an arrangement Mayor Sylvester Turner and outgoing Commissioner Gene Locke negotiated earlier in the year. A total of up to $45 million of projects are planned.

“Houstonians are more concerned about seeing results than they are about which governmental entity is paying for them,” said Mayor Turner. “This is government working together to meet the needs of our shared constituents. It is city/county cooperation at its best.”

“I have a strong belief in governmental agencies working together. The mayor and council have demonstrated a willingness to work with Precinct One on a number of projects that benefit the citizens and improve the quality of life in various neighborhoods. The street work is a principal category, but there are others to which the county benefits, especially through City of Houston Community Development Block Grant (CDBG) Funds for county projects in the City of Houston.”

• Amboy/Wayne from Liberty Road to Quitman

• Carr Street from Mills to Quitman

• Lee Street from Semmes to Jensen

• Noble Street from Jensen to Semmes

• Semmes Street from Lorraine to Campbell

• Sumpter Street from Semmes to Jensen

• Waco/Hirsch from I -10 to Clinton Drive

• Ardmore from Holcombe to Holly Hall

• Crosstimbers from IH 45 to Shepherd Drive

• McNee from South Main to Kirby

• Yellowstone from SH 288 to Scott

In order to facilitate this agreement, the City must temporarily transfer these streets to the Harris County Road Log. Once the work is finished, the streets will be transferred back to the City’s jurisdiction for ongoing maintenance.