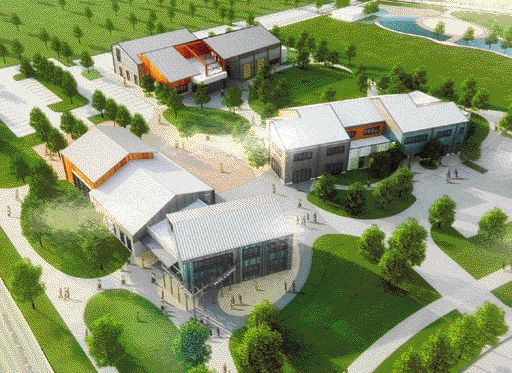 EAST ALDINE – The Neighborhood-Centers Inc. held a meeting last Thursday night, Sept. 22 to unveil the architectural renderings for the buildings on their campus, that they will build at the new Town Center on Aldine Mail Route.

The architects explained their approach to the design of the buildings, emphasizing that a driving force was the desire to involve the community, and reflect their ideas of the final result. However, they did emphasize that these were “schematic” drawings, with the possibility of development as time went by. They said these were more “character studies” and would have more final details later.

The project as shown consisted of three buildings, totalling about 44,000 square feet. According to Matt Starr, the cost estimate was originally $12.7 million dollars, but the budget was $12 million and the team is working to reduce costs where possible. In addition to the buildings, there is a large open grass area in the center of the complex, for outdoor recreation for students in the classes, and for informal meetings and presentatons.

The buildings are surrounded by parking, which is reached from an internal loop road. To the west of the site, Lone Star College plans an academic building, which will also include an Aldine ISD early high school. To the east, some neighborhood shopping and offices will be constructed by the District.