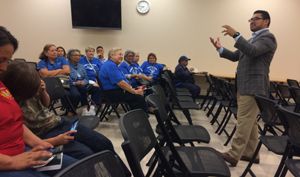 Last Thursday night State Rep. Armando Walle talked about community progress and heard about some issues during a town hall meeting in Aldine, this in preparation for the next Legislature which will begin in January 10, 2017.

“The two primary drivers of the state budget are Health Care and Public Education,” said Rep. Walle. “The budget that we are currently in, is about $200 billion dollars for every two years.”

Some work has been done with the Commissioner of Health and Human Services to “allocate those services to our district, and to Harris County.”

Rep. also Walle mentioned that this money, about $17 million will help to open a UT Physicians clinic on Jensen and Crosstimbers. This clinic will be in zip codes: 77093, 77039 and 77016 which includes Highway 59, Jensen, Little York and some Aldine areas.

Another big success for District 140 is the $1 million that through Texas Parks and Wildlife and with the help of now Mayor Turner, the district was able to redo Squatty Lyons Park located at 1701 Chamberlain St., 77093.

A new Town Center on Aldine Mail Rt., which is under construction, is causing some annoying dirt and dust to residents. Rep. Walle wanted to let the public know that they (District 140) and Aldine District know about it and are trying to minimize the situation. “Just know that what is going to be build there is transforming and will change lives for generations to come,” Rep. Walle added. This new Town Center will be home of the 9-1-1 Harris County Call Center, a Vecino Health Care clinic, a Lone Star College Satellite center as well as the East Aldine District offices and Neighborhood Centers, This last one has helped raised $20 million for the Town Center, Rep. Walle stated. Neighborhood-Centers will have its groundbreaking in the middle of next month.

• Castlewood Neighborhood water issue: Rep. Walle said it’s going slower than expected but that they are working on it. In fact, they are working with the Texas Commission on Environmental Quality (TCEQ) because “there is a lawsuit pending and a temporally restraining order with the water company.”

• Cement Company located on Hartwick Rd., they are also working to solve this issue to the best.

• Junk Yards: Residents explained junk yards are moving into the neighborhood, a committee will work on this and a bill could be filed at the next Legislative session.

• Law Enforcement Patrol: A Couple of concerned mothers asked for more patrol at Keith Weiss Park during kids’ practice time, 6:30 pm – 8:00 pm, M-Th, because cars are speeding and they also mentioned there are breaks-in at parked cars frequently as well. Rep. Walle said he will talk to Houston Police and Sheriff’s Office because this is a City park within Harris County. It’s important to mention that Harris County Sheriff deputies patrol this park on a daily basis and there is a bike and ATV patrol, on saturdays.

• Traffic: Residents also mentioned that traffic during school hours is very heavy including double-parking that sometimes blocks their way. Rep. Walle said there will be some traffic studies to solve this issue.

Other concerns were 18-wheelers parked on streets at residential areas with no sidewalks, speeding, illegal selling/dumping of dogs and animals and drunk driving.