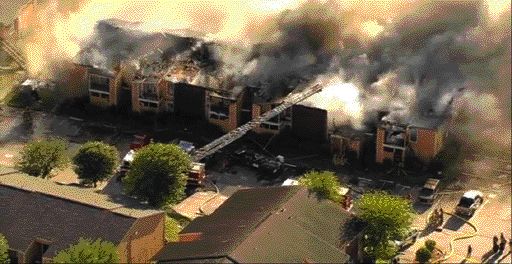 Firefighters responded just after 8:00 am to the scene to fight the fire.

Strong winds made it difficult for firefighters to battle extinguish the fire and called for a second alarm, by 10 am, the fire was under control, authorities reported.

About ten different fire departments responded to the fire because there was only one hydrant available and additional water from the fire trucks was needed.

Witnesses told authorities they saw two individuals running from the building. The building was under renovation at the time of the fire and no tenants were living at that building, all 24 units ere destroyed and no injuries were reported.

The cause of the fire is under investigation and authorities are still trying to identify the two people saw running from the building.