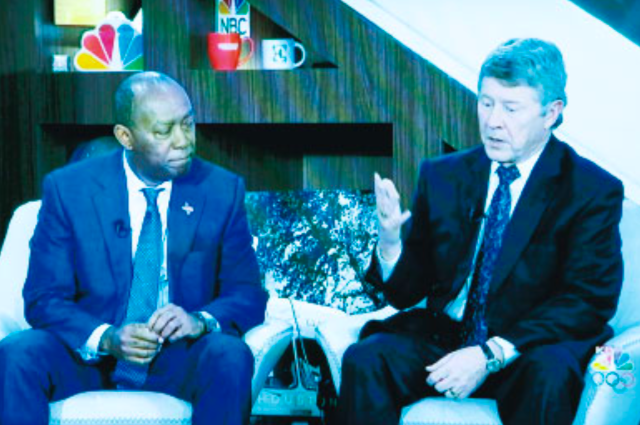 The two leaders were discussing the devastation from the floods after Hurricane Harvey, and what the plans are to alleviate future disasters. In addition, they answered questions from viewers that were phoned into the program.

In general the leaders agreed that this was the time for action to solve the flood problems of the area.

Emmett said that Harvey had changed our lives, and changes are needed in the regulations that govern building. He said they were based on a 100 year flood plain, when actually that most recent floods, 3 in 3 years, indicate a 500 year flood event instead. He said this change was being implemented in the county since January 1st.

Both leaders said that more money was needed, to help those who are suffering from the Harvey floods, and to improve infrastructure to minimizing flooding in the future.

Emmett said that a new third reservoir was needed, probably at a cost of more than $500 million. He noted that these reservoirs are federal projects, not county.

Turner noted that the city’s drainage fee was not intended to solve flooding problems, and flood projects would cost billions. Both speakers said that the state should release some of its “rainy day” fund to Houston.

“If this isn’t a rainy day, what is?” they quipped.

Emmett noted that Congress had appropriated $51 billion for flood, and had another bill that would release $81 billion for natural disaster relief in four states. They urged quick action to pass this, but said it wouldn’t be enough.

Emmett said that the County was planning on having a bond referendum later this year for the Flood Control District, and the public would have to decide whether they would pay for flood relief.

In the question period, Cynthis Neely asked why projects could not be required to retain 100% of their water run-off.

Environmentalist Jim Blackburn noted that Harvey was not a surge event but a rain and wind storm, and that a surge event would have been even more devastating. Plans for a so-called “Ike Dike” have been forwarded, but the cost is into many billions, he said.