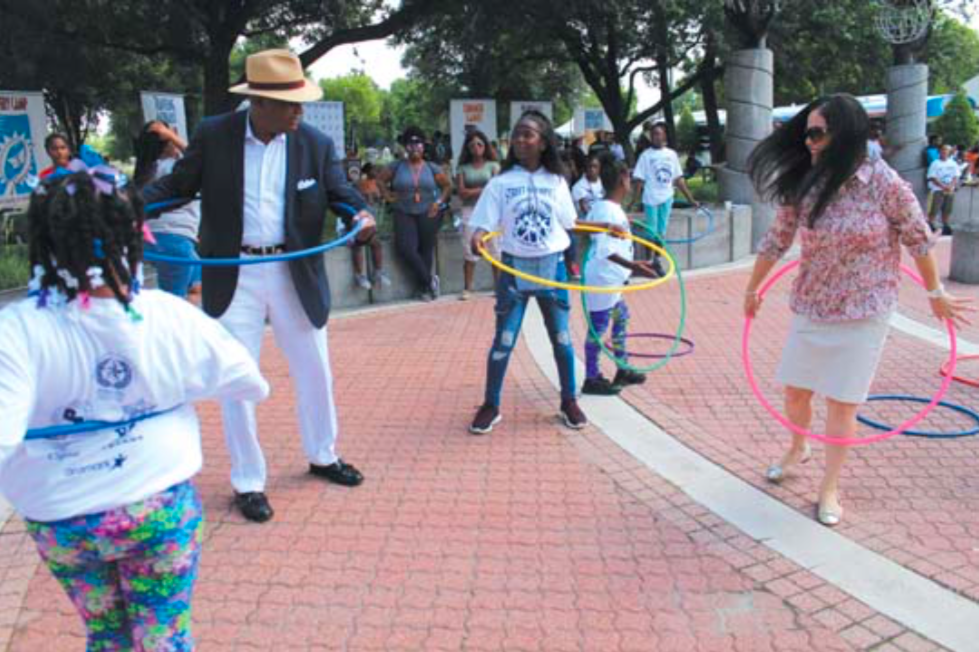 About 5,000 Houston-area youth, ages 6-17, are expected to participate in the Summer Games, Discovery Camp, 3-on-3 Basketball, and Harris County Aquatics Program’s Learn-to-Swim classes over an eight-week period. The Summer Games culminate in the Final Event, Bright Futures Fair and the closing ceremonies’ “Parade of Champions” on Aug. 3 at NRG Arena.

“I want to let you know that Street Olympics programs are about more than just games,” Commissioner Ellis said. “We are using sporting games to teach our youth about life, which involves teamwork, competition, self-esteem, discipline and confidence.”

Before and after the announcement, youth from Precinct One’s Finnigan Youth Education Town (YET) and Lincoln Park Community Center displayed their skills in basketball dribble, Hula Hoop, jump rope, kickball and football passing accuracy – just some of the 12 sports that aspiring young athletes will compete in over the summer.

“It felt good when I was walking (with the torch),” said Jackeline Hernadez, 11, of Lincoln Park, one of the torchbearers. “I had fun playing jump rope, Hula Hoop and kickball.”

The event also featured live animals displayed by trained handlers from Precinct One’s Environmental Education Program, which teaches children about animals and nature as part of the Street Olympics’ Discovery Camps hosted each summer at Deussen Park and Challenger Seven Learning Center in Precinct One.

“I learned about kickball, football and I touched the animals,” said Taneyah Capers, 9, also a torchbearer who attends YET.

Harris County Sheriff Ed Gonzalez, whose department is a Street Olympics’ sponsor, thanked the nonprofit agency’s Board of Directors, youth agencies, sponsors and the youth.

“We believe in you,” Sheriff Gonzalez said to the children. “We support you. And we want to help make things better. We know that things aren’t always in a good place, especially now.”

The nonprofit Street Olympics mission is to implement and sustain programs that provide training, support and resources that lead to healthy and productive lives for youth.

“During the summer months,” Commissioner Ellis said, “we use sports as the carrot to bring our youth to positive, structured activities. And we also engage their minds and build character in these young people.”