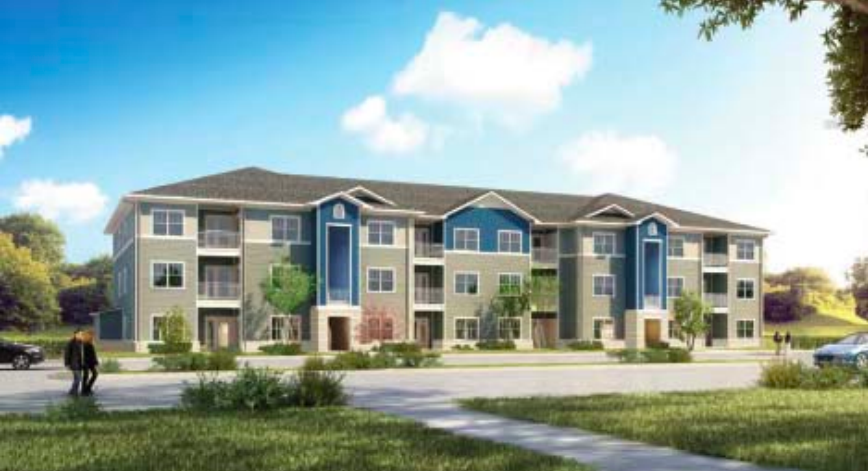 ALDINE – LDG Development, a national apartment builder of low rent housing, has announced their plans to build 288 units on a site in Aldine at the corner of the Eastex Freeway and Hamill Road. The property is currently owned by the Greater Pure Light church, who have decided to sell the land and not to build a new building there.

A representative from LDG Development, Dru Childre, has been meeting with local entities last week to advise them of the project, and arrange for schools and utilities to accommodate the project.

At a public meeting held last Thursday at the High Meadows library, Childre showed slides of the designs and explained the amenities and the plan for managing the apartments. Also present at the meeting were representatives of the Harris County Housing Authority, including their CEO Horace Allison.

About 25 local citizens attended the meeting, and many of them expressed concerns about the impact that the project will have on the neighborhood.

Questions were raised about how the project would be managed, to avoid crime such as characterizes the Haverstock Hills apartments, and poor maintenance as can be seen at the Pine Village townhouses. Both of these projects, and several similar ones, are located close to the site.

Marina Suggs, a former resident of Pine Village, said she chose to move away due to the problems at the project that were not corrected and getting worse. Shirley Reed recounted a similar project, Fairgreen, proposed for a site on JFK a few years ago, which was stopped when the community objected to more subsidized rent apartments. State Representative Armando Walle told the Northeast News that the Legislature enacted a law which allows a local representative to object to a project in his district, and effectively cancel it.

In this case LDG Development has gone to great lengths to answer these concerns, and provide an attractive, well managed and safe project for the community.

Childre explained that this is not a public housing Section 8 project, but rather a private development that will have various income limits and rental rates. To qualify to live here, prospective tenants must have an income 2-1/2 times the rental rate.

The project is being financed by a CBDG grant from the Harris County Community Development Department, and a 4% Tax Credit from the State of Texas, and tax exempt bonds.

LDG is one of the top Affordable Housing developers, according to the magazine of the same name. They are headquartered in Louisville, Kentucky. They currently have three projects in the Houston area, of which Childre showed slides. His company will make a 10 year commitment to build, maintain, and manage the Northwood project. In addition, nationally known Capstone Management will be in charge of running the project, selecting tenants and maintaining security. The project will be gated access, with security cameras.

Childre said that the cost of the 3 story walk-up apartment buildings would be about $35 million dollars, and total project costs $51 million. They are prepared to start construction in 2019 and open in 2020. It is expected that the project will generate about 150 construction jobs for the area, with tens of millions in wages. After completion, it will require six full-time positions with an annual aggregate income of approximately $320,000.

A mix of one, two, three, and four bedroom units are planned. Units are spacious, with balconies and laundry outlets. Buildings are three stories tall, walk-up type with no elevators.

The site development will include a playground, swimming pool, and a club-house. The clubhouse is to include a community room and kitchen, a theater room, fitness center, computer lab, and outdoor sitting areas and gazebo.

Childre said that apartments would be available for the elderly and handicapped, as there are no age restrictions except a minimum of 18 years old. Screening of prospective tenants takes place in all their properties, and you cannot be a felon, must pass a police background check, have a current job or income, and good credit rating. Your income must be from 30% to 81% of the area’s MSA medium in- come.

Childre showed detailed models of each unit size. These included:

Because the project is a partnership with the local housing authority, Harris County Housing Authority, the head of that organization, CEO Horace Allison, also spoke to the people at the meeting.

Allison spoke about how important proper management was to the community, and to his agency, and said they now have 8 projects in Harris County with similar controls. He said “We don’t tolerate people that violate the lease.”

He said that the HCHA now has 7 projects that are for the Elderly, and one that is a family-oriented project. Northwood Apartments would be a family type development.

Some at the meeting said they preferred single family or elderly units. Allison said they have a 90 acre site on Lake Houston that will eventually be developed for single family units, but finding sites in the urban areas is difficult.

Allison said that the Housing Authority had built 300 new units in the last 3 years, and was prepared to do more, including a new development for the homeless near the University of Houston. He said that Hurricane Harvey had caused a shortage of available units.