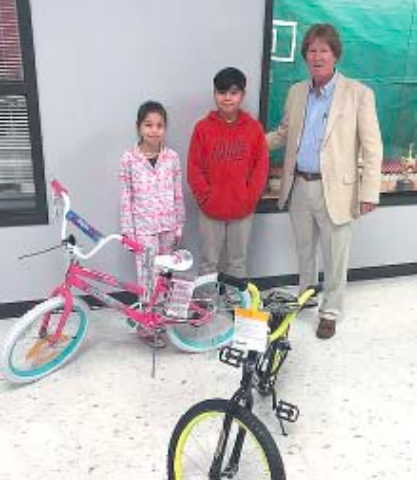 The nonprofit donated two bikes to every elementary school to award as prizes for literacy achievements.

For years, the Aldine Noon Optimist Club has supported Aldine ISD schools and students. This year was no different. The nonprofit donated 78 bikes — one for a boy and one for a girl — to every elementary school, which awarded the bikes as prizes for success in the reading initiative.

Steve Mead with the Aldine Noon Optimist Club delivered the bikes to each campus. Mead is also an Aldine Board Trustee.

Each elementary school taking part in a reading initiative has been awarding the bikes as prizes. For every book a student reads during the initiative, he or she puts his or her name in the box. They enter a raffle for an opportunity to win a new bike. Rules of participation and award dates vary from campus to campus.

According to Stacey Smith, this is not the first time that the club has participated in the project. Smith serves as director of special programs for AISD. She is also an Aldine Noon Optimist Club member.

“The Aldine Noon Optimist Club has helped Aldine ISD has been a great partner,” said Smith. “Over the last few years, the club has been donating bikes to every campus taking part in the reading contest. We appreciate what the club does for the District and I know the schools and the students appreciate it too.”

One of the campuses that received bikes is Carroll Elementary School. On Dec. 18, Principal Jennifer Price lauded the students for their efforts. The two lucky winners were fourth graders Samara García and Brandon López.