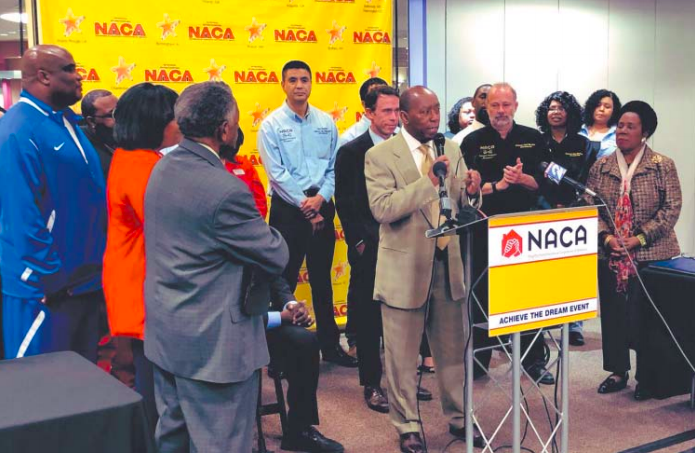 HOUSTON – Mayor Sylvester Turner joined NACA’s CEO Bruce Marks, a Bank of America executive to announce a commitment of $100 million of the Best Mortgage in America to Houston homebuyers. This will create unprecedented homeownership opportunities in Houston for low and moderate income buyers by breaking down the barriers that prevent many working people from buying a home.

The NACA program features no down payment, no closing costs, no PMI, a below market fixed rate, without consideration of one’s credit score. With Houston’s financial assistance and other funds, homebuyers can buy down the interest rate to virtually zero percent.

“This is one of my priorities. I want people to live and work in the City of Houston,” Mayor Turner said. “We are the fourth largest, and most diverse city in the country. We need the best and brightest to be able to afford to live in Houston and contribute to the city of the future.”

NACA’s Achieve the Dream Event took place at Greenspoint Mall the weekend of March 23. All NACA services were free.

NACA provides the same terms for all borrowers, many of whom had previously given up on homeownership. As Forbes magazine observed in their comparison of the best low down payment mortgages, “There is one exception, NACA, that charges the same rate regardless of the credit score”. Bank of America has committed $10 Billion to the NACA mortgage program nationwide.

Bruce Marks explained, “NACA believes homeownership is a right, and we are here to see that Houston’s woring people have the opportunity they deserve to achieve their piece of the American Dream.”