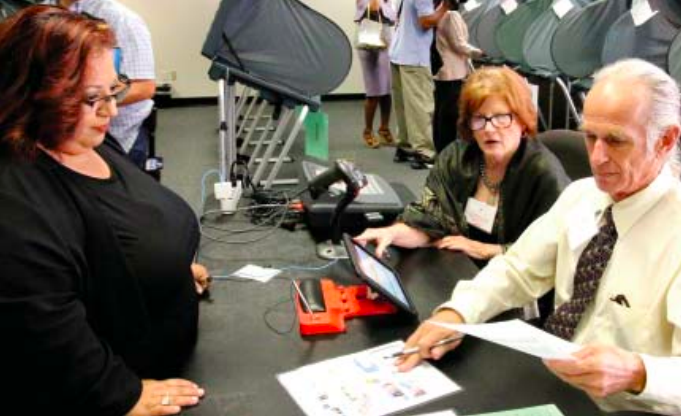 Trautman said after numerous Primary Elections, she has heard of voters not voting because they felt uncomfortable stating their party’s affiliation out loud to where others could hear. She said, “This new process is to remove any fear from one declaring their party affiliation out loud; the voter will have complete anonymity. This is not a partisan issue to help either party separately; this is to make all voters of both parties feel more comfortable.”

Michael Winn, Administrator of Elections, said, “Combining the amount of staff from both parties to run just one polling location allows for fewer clerks needed. This also reduces the amount of party specific staff needed at the locations but at the same time will also increase the number of locations to which staff can be assigned.”

The use of Election Day Vote Centers (EDVC), another new program of Trautman’s, allows voters to vote anywhere regardless of their home precinct, which will save them time by not having to stand in lines. They can go vote at any location that’s doesn’t have a long line. The EDVC will remove the problem of a voter not getting to vote because of going to the wrong location.

Trautman said, “Having a Joint Primary Election will reduce voter confusion and make the entire process less stressful for the voters and allow them to perform the most important right they possess: the right to VOTE.”

According to Teneshia Hudspeth, Director of Communications, she said the county already has the necessary equipment to implement this process and said it is estimated to save tax dollars of about $275,000.

The Joint Election process has been reviewed by both the Democratic and Republican Party Chairs; it will only take effect upon the approval of both chairs. The deadline for approval is July 15, 2019.