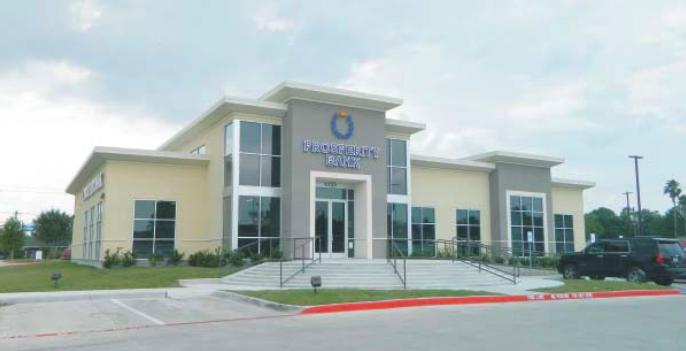 EAST ALDINE – The oldest bank in the Aldine area has a new building and modern new facilities next to their old location on East Little York.

Prosperity Bank is now conducting business from their new branch, which was completed and opened just recently.

The bank announced that they had sold their old three story building next door, and it would be torn down by the new owners, and two fast food restaurants built on the site.

The new building is a one story facility with as many active teller windows and drive-thru lanes as the old building, since this branch is one of the busiest of all 250 locations in the Prosperity Bank network. They have branches throughout Texas and Oklahoma, according to their spokesperson.

Prosperity also has two other offices in the East Aldine district, including one on West Little York, and another on Aldine-Bender.

The building design is a modern stucco commercial motif, set several feet above the street level due to potential flooding in the area of Little York. The interior lobby has clerestory windows and is bright and pleasant. Lounge furniture is provided for customers as they wait to conduct business.

The bank has a new manager, Jack Battle, as well as an officer Sue Luther who has been with the branch for many years. Prosperity acquired the bank, then known as North Houston Bank, in 2009 after it failed and was taken over by the federal FDIC. Prosperity Bank is very active in the Aldine area, contributing scholarships to Aldine ISD students, and participating in other community events by various organizations. Several of their officers have been board members of the East Aldine District over the years, and they maintain a strong fiscal relationship with the district.