GREENSPOINT – Houston City officials and residents were mourning the loss last week of an HPD officer in a helicopter crash in the Greenspoint area. One officer was killed, and the other officer is in critical condition after a Houston Police Department helicopter crashed early Saturday, May 2, 2020 in an apartment complex in north Houston.

The HPD crash was reported at about 2 a.m. at the Biscayne At Cityview Apartment complex located at 17050 Imperial Valley Drive, near the Greenspoint neighborhood.

Authorities identified Jason Knox, 35, as the tactical flight officer involved in the crash, he later died at the hospital. Knox had been with the police department for eight and half years and had been with their air unit for one year and three months. 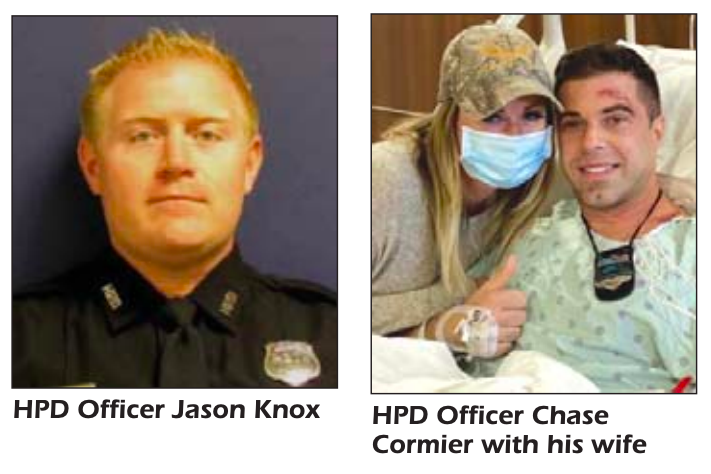 The second officer, Chase Cormier, 35, was airlifted to Memorial Hermann hospital for treatment. At a news briefing Saturday afternoon, Houston Police Department Chief Art Acevedo said Cormier was out of surgery and conscious.

According to HPD, Cormier was sworn in as an HPD officer in July 2006. He is currently assigned to the Air & Marine Division. Cormier has been with the air support unit for three years.

According to officials, the two officers were in the 75 Fox helicopter from the Houston Police Department’s Air Operations Unit and were investigating reports of bodies floating in a bayou.

“They responded right before 2 a.m. and within minutes we got reports from the Houston Forensic Science Center crime scene unit that was working a murder scene at the 17000 block of Imperial Valley that our helicopter had gone down,” Acevedo said.

The pilot and the co-pilot were trapped in the wreckage for a while as crews worked to get them out. Firefighters worked had to cut the pilots out of the wreckage.

No residents were injured in the crash.

The funeral service took place on Saturday, May 9 at 11:00 a.m. at Houston’s First Baptist Church.

Following the funeral service, full police honors were rendered outside the church, with social distancing protocols in place.