Mural at library emphasizes the importance of the census 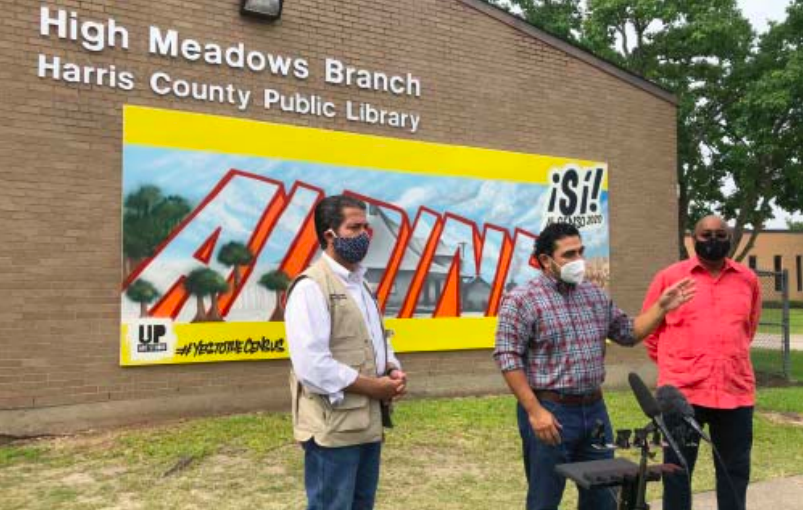 Commissioners Adrian Garcia, Rodney Ellis, and Representative Armando Walle were on site to provide important updates regarding census self-response and why completing the census is so important to secure federal funding for accurate representation and improved resources that are vital to creating vibrant, informed, and progressive communities.

The Aldine mural, like its predecessors, is a visual representation of the urgent need for more citizens to complete their census questionnaire prior to the October 31, 2020 deadline. The design is a “picture-perfect postcard” view of the neighborhood with the caption, “Greetings from Aldine!” The mural was conceptualized and installed by local artist Colors Oner 713. The mural’s location at High Meadows Library has a special significance and deeper relationship to the goal of a complete count with a 100% response rate. Not only is federal funding for libraries determined by the census, but as Census 2020 is the first to be conducted primarily online, libraries remove barriers to census completion by providing a place where citizens who do not have home access to internet services can go to respond to the questionnaire. To that effect, Harris County Library Director Edward Melton will announce that the library will kick off a Yes! to Census 2020 initiative through October 31, 2020, which will include:

_ A computer dedicated as a “Census Station” with the 2020census.gov website on display

In pre-identified undercounted communities, UP Art Studios identified local artists and partnered with community residents to create vibrant murals that reflect each area’s unique character, ethnicities, needs, and dreams, to deliver the Yes! to Census 2020 message. The fifth and final mural will be released at the South Central Houston’s S.H.A.P.E Community Center by artist Israel McCloud in July.

The Yes! to Census 2020 campaign aims to educate Houston and Harris County residents that the census is important, urgent, safe, and easy to complete. Local trusted voices and hyperlocal influencers unify Houston and Harris County residents by amplifying and encouraging participation among multicultural and potentially undercounted populations. A website with Census 2020 resources, information and events can be found at www.HarrisHoustonCounts.com.