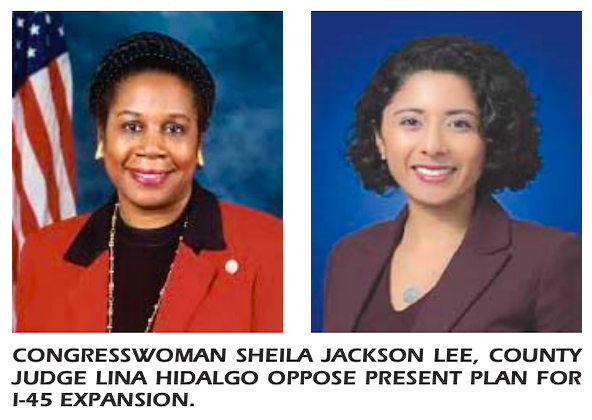 “This is a big deal,” said Fred Wagner, an attorney who served as general counsel at FHWA for three years during the Obama administration. “It just doesn’t happen very often.”

Known as the North Houston Highway Improvement Project, the proposal would widen I-45 in three sections. TxDOT’s environmental review of the project, completed in February, found it would have a massive impact on the communities it would roll through, displacing more than 1,000 homes and housing units, 344 businesses, five places of worship and two schools.

Local activists say the communities that would be harmed are disproportionately home to Black and Hispanic residents. And the impacts go beyond the direct displacements: Twenty-six schools would be brought within 500 feet of the highway, increasing children’s exposure to pollution in a metropolitan area that’s already rife with car exhaust.

“How can we accept a project like that? It stays with us for a generation at least,” said Lina Hidalgo, the elected county judge for Harris County, which primarily contains the Houston metro area and its exurbs, in an interview.

Opponents of the project have proposed an alternative that Hidalgo said has a narrower footprint and allows for transit. The county recently sued TxDOT, saying it failed to take the environmental impacts into consideration during its planning and review.

“I can’t tell you the number of conversations we had with the state on this,” she said, adding that she has received “nothing but lip service.”

“You can imagine the frustration,” she said. “It’s been so much time, effort, and heartache by the community as well.”

DOT’s intervention was a welcome surprise, Hidalgo said, adding that it gives opponents of the project a “more realistic opportunity” to get redress.

“I think [Buttigieg] was engaged, interested and fair,” said Jackson Lee, who said she spoke to the DOT head recently about the project. “And I think he was chagrined at federal dollars being used with such disregard of community views.”

The Houston project, with its promises of displacement and disenfranchisement echoing the destructive historic highway building that Buttigieg has repeatedly cited, is a test case for Buttigieg, Wagner said.

“It’s going to be the first kind of test of the new administration to demonstrate how it’s going to apply its standards for more equitable transportation on a mega-project like this,” the former FHWA counsel said.

The project has been in the works for years. So “for DOT to step in, potentially, and say ‘We don’t think it’s an appropriate solution,’ would be a really huge deal,” he said.

Part of the reason the situation is so unique is that Texas is a so-called “assignment state,” one of seven designated as able to serve as a proxy for the federal government when it comes to administering the National Environmental Policy Act.

In most states, the federal government could raise issues with disproportionate impacts through the normal federal environmental review process. But Texas, as an assignment state, already completed that process which resulted in the Record of Decision finalized in February.

So the federal DOT has turned to Title 6 of the Civil Rights Act to justify its pause, which states: “No person in the United States shall, on the ground of race, color, or national origin, be excluded from participation in, be denied the benefits of, or be subjected to discrimination under any program or activity receiving Federal financial assistance.”

Next steps could include DOT ordering Texas to redo its analysis of the project, or more drastically, fully reject it under civil rights laws.

“They didn’t necessarily play their hand when they said we’re going to take a pause,” said Wagner.

Neither FHWA or TxDOT responded to specific questions.

“FHWA and USDOT officials are evaluating several Title VI concerns raised by Houston-area community groups regarding the project,” a spokesperson for the federal agency said.

And TxDOT spokesperson Adam Hammons said that the agency is “in contact with FHWA seeking clarity around what a pause might mean as far as timing is concerned for future contract solicitation efforts.” He would not comment on specifics, citing the pending legislation.