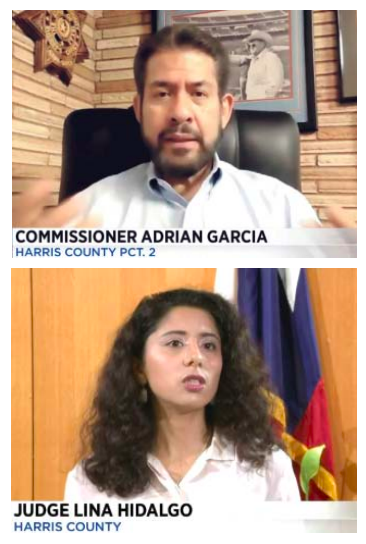 Harris County and Houston officials learned Friday that the state GLO (General Land Office) and the federal HUD (Housing and Urban Development) had determined that these two governments would not receive any Flood Mitigation funding of the approximately $1 billion that was available, in the first round of allocations by the state.

The allocations are based on a formula to determine which communities are the neediest, according to GLO. Within Harris County, approximately $90 million was allocated to Baytown, Pasadena, Galena Park, and Jacinto City for flood mitigation projects that they had applied for.

Harris County had submitted an application asking for $900 million, according to Pct. 2 Commissioner Adrian Garcia. Commissioner Garcia, Harris County Judge Lina Hidalgo, and Houston Mayor Sylvester Turner issued statements expressing their displeasure and disbelief in news of the allocations not including local jurisdictions.

Commissioner Garcia said that he was upset, and “incredibly frustrated.” Judge Hidalgo said, “It is unconscionable that the very community hit with the most flooded structures by far during Hurricane Harvey received nothing as part of this Harvey Mitigation allocation.”

Mayor Turner said, “For the State GLO not to give one dime in the initial distribution to the City and a very small portion to Harris County shows a callous disregard to the people of Houston and Harris County.”

Judge Hidalgo said that she plans to ask HUD for a review of the criteria used, and assurance that the County will receive future fund allocations. She said the formulas that are used disadvantage large urban areas that are hardest hit.

The Official GLO statement on Harvey Mitigation Fund Allocation, which was released late on Friday, follows, with Editing:

“In recent years Texas has led the nation in disaster declarations, and the historic funding we’re announcing today will go directly to projects that will help fortify Texas homes, businesses and critical infrastructure against future disasters,” said Commissioner Bush. “The GLO received more than $6.5 billion in requests for mitigation project funding for low-to moderate-income communities, underscoring the urgent need for increased resiliency throughout the Texas coast. We continue to work hard every day to put these federal funds to work protecting our coastal resources and communities, from our ports to our most vulnerable residents.”

“The severe storms we’ve had in the past show just how much of southeast Texas, is vulnerable when watersheds converge in the Houston Ship Channeland that includes Pasadena,” said Mayor Jeff Wagner. “We’ve got one of the busiest ports in the world right in our backyard and it’s a vital link in the regional economy,” said Jeff Wagner, Mayor of Pasadena. “Many people also don’t realize that floodwaters can threaten our wastewater treatment plants, putting our residents at risk. Since I became mayor in 2017, my administration has been committed to flood mitigation and drainage, and this $47 million grant from the Texas General Land Office is a fantastic partnership. Many communities will see relief from this generous grant award program. What’s even more amazing is Pasadena’s grant is only part of an overall $90 million that’s going to support several projects. This is really going to benefit residents throughout Harris County.”

“While I am disappointed that the City of Houston was not awarded flood mitigation funding, I am pleased that Pasadena, Galena Park, Jacinto City and Baytown in Senate District 6 received money for their proposals,” said Senator Carol Alvarado. “These flood control resources are desperately needed by smaller cities who often lack funding for infrastructure projects. Past severe storms have shown how southeast Texas is vulnerable when watersheds converge in the Houston Ship Channel – which serves one of the busiest ports in the world and is a vital link in the regional economy. The $90 million in project awards from the Texas General Land Office will support several projects that will benefit residents throughout Harris County.”

In May 2020, Commissioner George P. Bush announced the kick-off of the application process for the first round of more than $2.3 billion in Community Development Block Grant Mitigation (CDBG-MIT) funds from the U.S. Department of Housing and Urban Development (HUD) to protect Texas communities hit by Hurricane Harvey and severe flooding in 2015 and 2016. During the first round, the GLO conducted three competitive application programs from the CDBG-MIT Action Plan. Those programs include:

Applications closed for the first round of funding October 28, 2020, and the GLO evaluated all 290 submitted applications in accordance with the HUD approved scoring criteria. Eligible applications with the highest scores were awarded funds. The second round of the competition will award the remaining $1,144,776,720 in mitigation funding to Hurricane Harvey eligible entities.

HUD defines mitigation as activities that increase resilience to disasters and reduce or eliminate the long-term risk of loss of life, injury, damage to and loss of property, and suffering and hardship, by lessening the impact of future disasters. HUD requires that at least 50% of total funds must be used for activities benefiting low- to moderate-income (LMI) persons.

The State of Texas CDBG Mitigation Action Plan: Building Stronger for a Resilient Future outlines the use of funds, programs, eligible applicants, and eligibility criteria as required by HUD. The plan was sent to HUD on February 3, 2020, after an extraordinary public outreach effort including a 50-day public comment period and eight regional public hearings, far-surpassing HUD requirements. HUD approved the plan March 31, 2020. For more information, please visit recovery.texas.gov/ mitigation.

The Vince Bayou and Cotton Patch watershed are contiguous and combine in the Houston Ship Channel during severe coastal flooding events caused by hurricanes and stalling tropical storms. The project represents a strategy to mitigate and relieve some of these impacts during Hurricanes and Tropical Storms that occur frequently in the upper Texas gulf coast.

The Vince Bayou portion of the project will separate disparate exposure of storm water distribution from the Little Vince Bayou branch of Vince Bayou, create additional storage through detention along Little Vince and taking advantage of existing freeboard in the existing channel, and reduce current major floodplain losses in Armand Bayou.

Most of Baytown’s East District Wastewater Treatment Plant is located within the 100-year flood plain. This project will protect city assets and prevent potential damage from future flooding events and protect operational safety to serve the community. The sum total of these efforts will bring the major process areas of the plant above the 500-yr flood plain level by at least one foot and protect the plant in the future against severe damage such as that seen during Hurricane Harvey in 2017.

To increase flood resiliency of the East District Wastewater Treatment Plant, the city of Baytown will execute the following:

Add a protective wall around the treatment units.

SCADA to allow control from a remote location preventing the inability of the operators during flooding events.

Jacinto City’s wastewater treatment plant site, located next to Hunting Bayou, flooded during Hurricane Harvey. During the storm, the bayou overtopped its high banks which impacted the city’s ability to effectively treat wastewater. Hardening the plant by building a stormwater holding tank will help the city reduce the probability of the Wastewater Treatment Plant overflowing during storm events. The project will further increase the lifespan of the Wastewater Treatment Plant and improve the city’s ability to treat wastewater effectively during high flow events leading to Inflow and Infiltration and high water on the site. These improvements will contribute to the health and safety of the citizens by reducing the risk of exposure to raw sewage.

Through the project the city will:

— Build a stormwater holding tank to the wastewater treatment plant

— Replace/rehabilitate structures within the plant