East Aldine to get sculpture by famed Artist

EAST ALDINE – A huge bust statue of the late president John F. Kennedy may soon mark the northern edge of the District, and greet travelers arriving from Intercontinental Airport.

The Art Committee of the East Aldine District has recommended to the board the purchase and installation of a unique statue of JFK, sculpted by famed artist David Adickes. Adickes is known for the towering statue of Texas hero Sam Houston, which sits along the highway I-45 in Huntsville.

According to Silva, the art committee has a number of projects that would bring public art to East Aldine. These include the Big Walls Big Dreams mural recently painted on the wall at the High Meadows library, Mini Murals on utility boxes, the JFK statue, and a gigantic mural scheduled for the lobby wall of the new East Aldine District office building, that would tell the story graphically of the history of the Aldine Area.

The EAMD board voted to proceed with engineering work required for the JFK statue. CobbFendley was awarded a contract for $40,000, and the District plans to purchase the statue for $25,000. Additional funds would be required for the installation work.

The JFK statue proposal has received wide acclaim, bringing high quality art to the district which will enhance our reputation city-wide. Executive Director David Hawes commented that in 20 years, the District has spent $60 million for water and sewer improvements, and public safety, so “it is time to improve the appearance in the District by spending these dollars.” The introduction of an art program is consistent with the original intent to enhance the quality of life in the district. 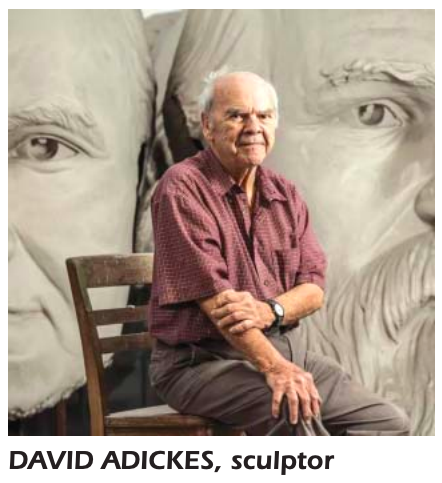 Born 1927 in Huntsville, Texas, David Adickes earned his undergraduate degree in physics and mathematics from Sam Houston State College (now University). The summer after graduation, he attended the Kansas City Art Institute and realized that art was what he really wanted to do. Adickes used his G.I. Bill to study painting in Paris with the modern master, Fernand Leger. He returned to Houston and began painting full-time.

In 1983, he was commissioned to make his first monumental sculpture, Virtuoso, which now resides at the Lyric Center in downtown Houston. Adickes also created the 76-foot tall figure of Sam Houston that stands on Interstate 45 just south of Huntsville. 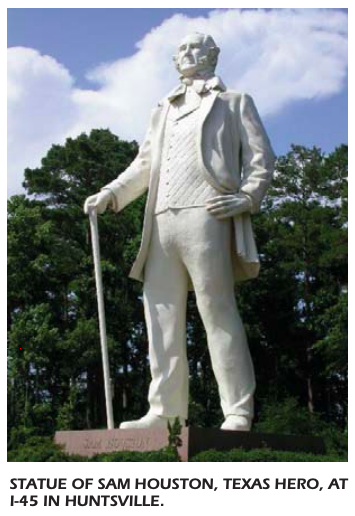 He is known for the large statues he sculpts. He sculpted a 67-foot replica of Sam Houston for the city of Huntsville, Texas. In Lead, South Dakota, Adickes created 43 enormousness busts of each American president for display at an educational museum.

His workshop in Houston is open to the public and features many of his most outstanding works. Not intended to be a destination, the workshop/gallery has turned into a destination, an often surprising site where one can see something out of the ordinary in the middle of East Aldine to get sculpture by famed Artist an industrial part of Houston, Texas. Giant heads will occasionally sit in the parking lot and huge sculptures of the Beatles and former President Bush can be seen from the street. Occasionally one will find Adickes working in the shop, with his six employees, slowly crafting ever more extravagant work.