WASHINGTON, DC – Last week a group of Democratic state legislators met with Vice President Kamala Harris to discuss the ongoing fight to protect voting rights in Texas and to urge the US Senate to pass H.R. 1 and H.R. 4 to combat coordinated voter suppression efforts taking place across the country.

Sen. Carol Alvarado (D-Houston), the chair of the Senate Democratic Caucus, released the following statement after the meeting:

“Today the members of the Texas delegation had a productive conversation with Vice President Harris about the fight against voter suppression in the Texas Legislature and the importance of H.R. 1 and H.R. 4.

“We are grateful for Vice President Harris’ partnership and support in our nation’s capitol as Democrats aim to preempt Jim Crow style laws from every level of government. As we look toward the next special session in Austin, the Texas Senate Democrats will continue to do our part in the fight to ensure that our sacred right to vote is not taken away by blatant Republican voter suppression tactics.”

Texas Democratic Caucus group at the White House, preparing to meet Vice President Kamala Harris regarding SB7 and HB1, bills that deal with voter restrictions in Texas and nationwide. Chairman Carol Alvarado, Texas State Senator, is at the center in a blue dress. 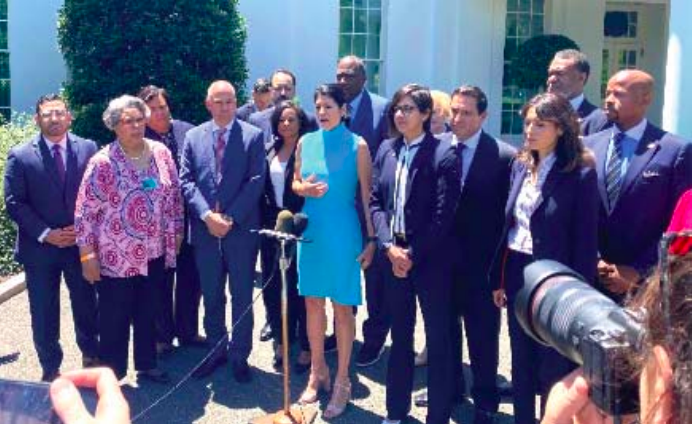 For questions regarding the Texas Senate Democratic Caucus, please contact Sushma Smith by email at jasti.smith@gmail.com or (281) 772- 9618.