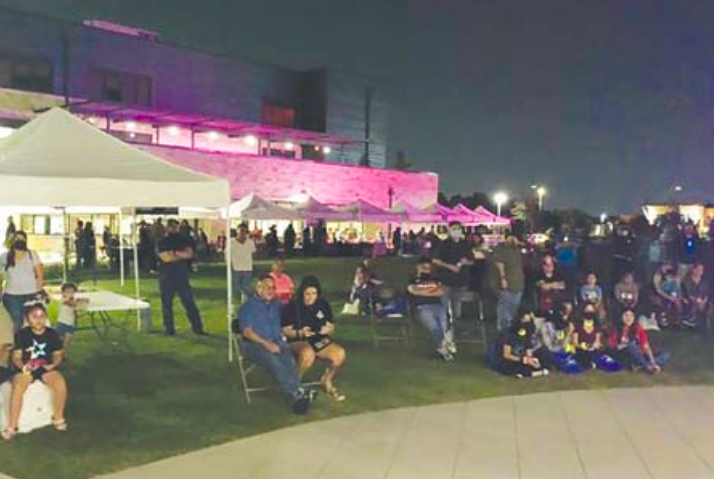 (All photos courtesy of Marina Sugg and Veronica Sanches)

EAST ALDINE – The 38th annual celebration of National Night Out backed by the East Aldine Management District reflected a conscious effort to build trust between law enforcement and the community — a key to improving public safety.

Dozens of area families turned out for the Oct. 5, 2021 event at the District’s new Town Center great lawn and amphitheater for the celebration.

It was an opportunity for kids to see that flashing red lights and sirens are not automatically threatening or scary. And it was a chance for law enforcement officers to joke with pom-pom waving teenagers and toss Frisbees with young boys.

Harris County Sheriff’s Office Capt. Chris Sandoval said that National Night Out has evolved from being a neighborhood-by-neighborhood event to a community-wide celebration.

“We have so many people here, all in one location, to get to know each other,” Sandoval said. “It helps combat crime. Criminologists will tell you that if you know your neighbors and you know they are a part of your community, then there is more of a sense of wanting to protect each other.”

“Law enforcement can be the beneficiary of that,” Sandoval said. “When you have community groups that are looking out for each other, they will contact law enforcement whenever they see any type of crime going on in their neighborhood. That often translates into a community-wide effort to combat crime.”

Sgt. Ray Coronado, a 30- year veteran of the Sheriff’s Office, said there “has been tension” between law enforcement and the community, notably in the wake of the police killing of George Floyd in Minneapolis.

“I had my badge during the (1991 Los Angeles) riots after (the police beating of) Rodney King, and we could feel some of that tension here. But that was nothing compared to what’s happening now. That was far away, but now there have been protests in every community,” Coronado said. “It’s gotten a little better, but we’ve still got a way to go.”

One challenge for law enforcement officers in the Houston area, Coronado said, is the presence of undocumented residents who are fearful of reporting crime.

“Because I’m originally from Mexico, I can understand that (some) immigrants have distrust of the police,” Coronado said. “I have had to explain the U.S. legal system.”

“Many immigrants distrust police completely, because of all the corruption (in their countries of origin). I have dealt with many immigrants whose first question is, ‘How much is this going to cost?’” Coronado said.

Domestic violence, especially during the pandemic, was a big problem in the immigrant community as well.

“Many women were very fearful about reporting it, because they didn’t want the primary breadwinner taken out of the household,” Coronado said. In those cases, “trust (with law enforcement officers) can be very important.”

Carlos Silva, District board vice chair, said he was pleased that the event included “all of the community partners,” from the Harris County Public Library to Lone Star College to local civic clubs.

“We’ve got all the cool stuff – the fire engines, the helicopter – for the kids to come and see. But at the same time, we’ve got educators, all the community activists,” Silva said. “When everybody can come to this great space to be together, it builds community pride. And that will go a long way toward fighting crime.”

“It’s about shared values,” Silva said. “You can see that we are building and promoting civic pride. And that helps people realize there is the opportunity to build and grow even more.”