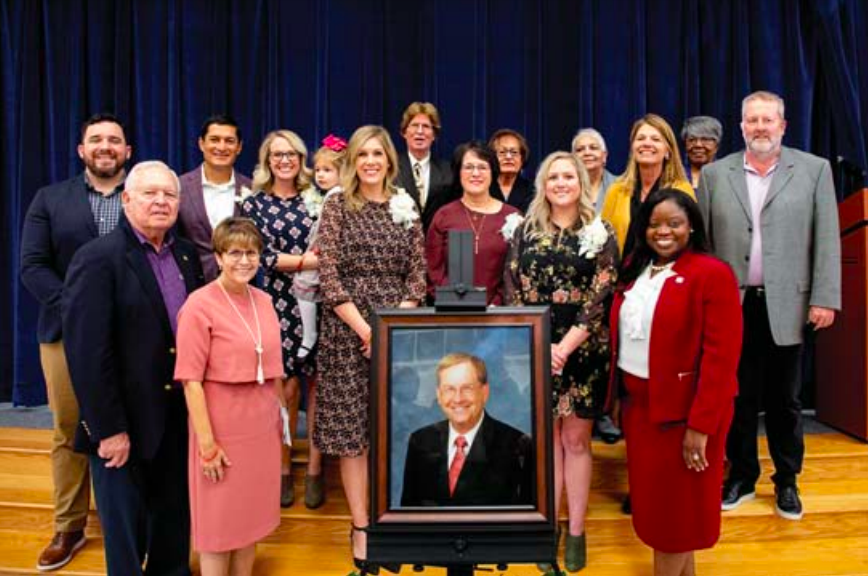 For 39 years, Ken Knippel devoted himself to the students and staff of Aldine ISD. On Sunday, Nov. 7, the district rewarded his loyalty and dedication to AISD by officially dedicating the Kenneth R. Knippel Education Center in his honor.

For 13 years, Mr. Knippel served as the Assistant Superintendent of Administration and one of his goals was to have the district build a new alternative education facility. That dream became a reality in 2015 when Aldine voters overwhelmingly passed a $798 million bond referendum. Part of the bond package included building the new Aldine Education Center (AEC). Mr. Knippel saw his dream become a reality when AEC opened in August of 2018.

Unfortunately, Mr. Knippel passed away in January of 2020. Aldine ISD’s Board of Trustees knew how much the facility meant to him and voted to re-name AEC the Kenneth R. Knippel Education Center in his honor.

The dedication ceremony was originally scheduled for April of 2020, but due to the COVID-19 pandemic, it was rescheduled for Sunday, Nov. 7.

Mr. Knippel’s wife Susan thanked the Board for re-naming AEC after Mr. Knippel.

“I’d like to humbly thank the Aldine Board of Trustees for voting to rename this valuable education center as a tribute to Ken’s great love for Aldine ISD,” Mrs. Knippel said. “I’d like to thank the past and present board members, the Executive Leadership Team, principals, teachers, friends and family for being here today.”

“The students of Aldine, or ‘kids,’ were Ken’s favorite part of every job. He always wanted to be where they were. He liked being in the commons, in the hallways during class change, in the cafeteria, on the bus ramp and at after school events. He said you can learn a lot about kids by knowing who their friends are, watching how they interact with others, and observing what they eat for lunch.”

In the summer of 1980, he interviewed with then AISD Athletic Director M.B. “Sonny” Donaldson (who later became Superintendent of Schools) and with Teague Middle School Principal Sue Wooten. He accepted a job as a coach and History teacher at Teague Middle School and thus began a 39-year association and devotion to Aldine ISD.

During his 39 years with Aldine, Ken served as a teacher, a coach, as an assistant principal and principal of three campuses (Parker Intermediate School, Nimitz Ninth Grade School and Nimitz High School). He was the first-ever principal at Parker and Nimitz Ninth. In 2006, he was named Assistant Superintendent of Administration, a position he held for 13 years. Mrs. Knippel added Mr. Knippel’s mentors were Mr. Donaldson, Mrs. Wooten, former Superintendents Nadine Kujawa, Dr. Wanda Bamberg, and present Superintendent Dr. LaTonya M. Goffney. Others who served as his mentors were Wilbert Johnson, Barbara Glass, and Vernon Lewis.

While he enjoyed all of his roles, Mrs. Knippel said Ken cherished his time as a principal.

“Ken had many important and challenging jobs but his most favorite and his hardest jobs were being a building principal,” she said. “Ken believed a building principal was the unwavering pillar, the corner stone and foundation of the school’s environment and culture.”

That’s why seeing the district build a new site for its alternative education center was so important to him, Mrs. Knippel said.

“Ken believed in the theory that we are all born innately good,” she said. “It is circumstances and consequences from decisions we make that lead us in the wrong direction. He wanted all kids to be able to earn their diploma and he never wanted to give up on anyone. His mantra was always do what’s best for the kid. Sometimes to keep all kids safe, it was best to remove a student from their home campus for placement at the alternative center. The worry was the temporary buildings at the Alternative Placement Center had a dreary punitive atmosphere. For a long time, Ken tried to find a more positive environment for the kids and the staff at the Alternative Center.”