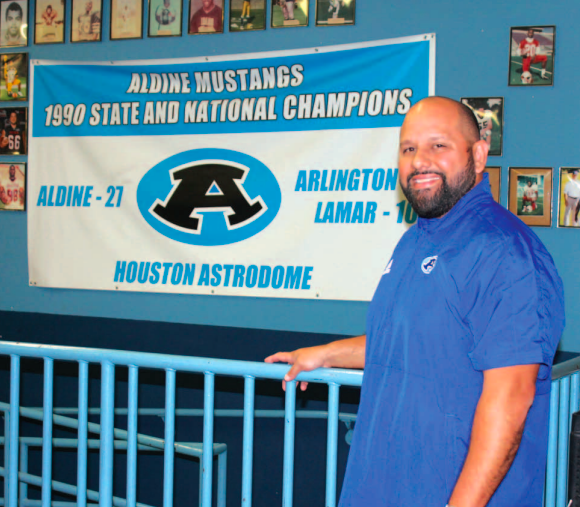 Cirilo Ojeda Jr. has been named the new head football coach at Aldine High School. He comes to Aldine after serving as head coach at Sharpstown High School in Houston ISD.

Cirilo Ojeda Jr. likes a challenge and that’s one of the main reasons he gladly accepted the opportunity to become the new head football coach at Aldine High School.

Ojeda comes to Aldine High after serving as the head coach at Sharpstown High School in Houston ISD for the last two years.

The Mustangs have struggled as a program the last few years, and Ojeda is focused on turning things around, and he’s aware it won’t happen overnight.

“I want to accept the challenge to get back to where this program has been,” the University of Houston graduate said.

“Where” the program has been was a perennial playoff participant under longtime head coach Bill Smith. During Smith’s 29 years as the Mustangs’ head coach, Aldine won 237 games, which included a state and national championship in 1990 when the team finished 15-0.

The 41-year-old said he became interested in coaching as a profession in college when he would assist his father, Cirilo Ojeda Sr., and his uncle coach youth football.

His wife Angela also had an influence on him becoming a coach.

“My dad and uncles had a dream for me to become a coach, and my wife also pushed me in this direction,” Ojeda said. “I’m glad I listened to them.”

Ojeda was named the Mustangs new head coach in February and he has hit the ground running. He and his staff have implemented the offseason program. There are currently 55 players on the team and Ojeda hopes to increase those numbers between now and the start of the 2022 season. Ojeda knows he is facing a tough challenge entering District 14-6A with perennial powers Westfield and Spring, along with Aldine ISD’s four other programs.

“Our immediate goal is to focus on us,” he said, when asked what he hopes to accomplish in his first season. “We want to recover some kids and get them back in the program. We want to implement structures to where we can be successful. We will focus on us and not worry about what anybody else has.”

In his two years at Sharpstown, Ojeda oversaw a program that broke a 21-game losing streak and a five-year district losing streak. His last team finished 3-7, but lost two games by six combined points. If they had won those two games, they would have earned a playoff berth.

“I had my eye on it,” he said. “We want to honor our past and move into the future. We want to keep the Aldine brand and bring pride back into this program.”

Ojeda said the Mustangs will run the I on offense with some spread concepts and play a 3-4 defense.

He said he’s been proud of the work the team has put in thus far in the offseason and he said he and his staff will coach more than football.

“It’s about becoming a better person in life,” Ojeda said. “We’ll focus on teaching the kids life lessons and accepting challenges. We’ll also focus on how to be a team. We want to instill discipline and create a mentality to get to the fourth quarter and be competitive.”

Ojeda and his wife Angela and have two children, Ava, 14, and Nathan 12.