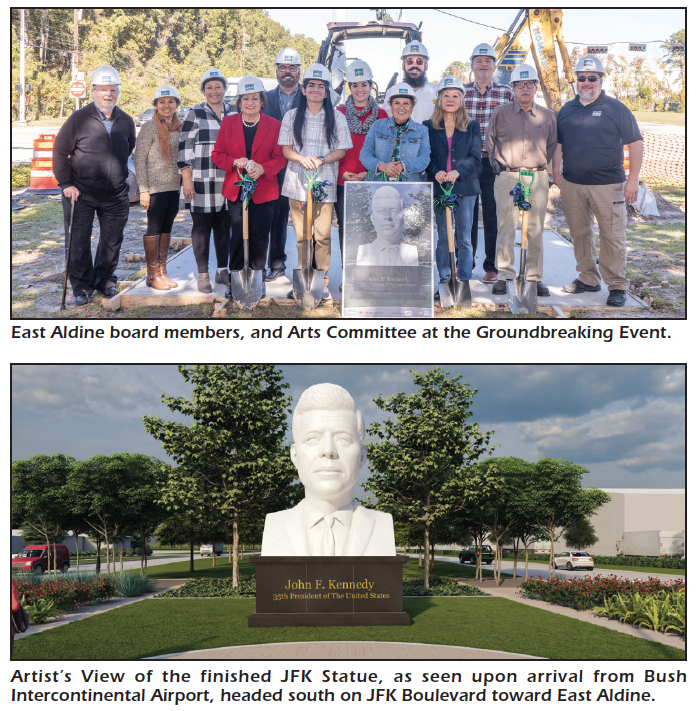 East Aldine District and its Arts Council Committee held a groundbreaking last Monday, November 28th for the installation of a massive sculpture of a bust of the late President John F. Kennedy at the intersection of JFK Boulevard and Aldine-Bender Road.

The District acquired the art piece from famed sculptor David Adickes, who created other larger-than-life sculptures such the statue of Sam Houston on Interstate 45 north of Houston and busts of other presidents along Interstate 10 at Interstate 45 near downtown Houston.

When completed, the JFK project will serve as a greeting to travelers arriving at Bush Intercontinental Airport, a statement about the District’s commitment to public art, an attraction to be visited by people throughout the Houston area and a gateway to the East Aldine District.

As chairman of the Arts Council Committee, board member Carlos Silva welcomed the guests to the groundbreaking, and spoke about the unique opportunity of East Aldine to host artwork of this caliber, and enhance the image of the area.

The JFK statue proposal has received wide acclaim, bringing high quality art to the district which will enhance our reputation city-wide. East Aldine Consultant David Hawes commented that in 20 years, the District has spent $60 million for water and sewer improvements, and public safety, so “it is time to improve the appearance in the District by spending these dollars.” The introduction of an art program is consistent with the original intent to enhance the quality of life in the district.