NORTHEAST NEWS COACH OF THE YEAR 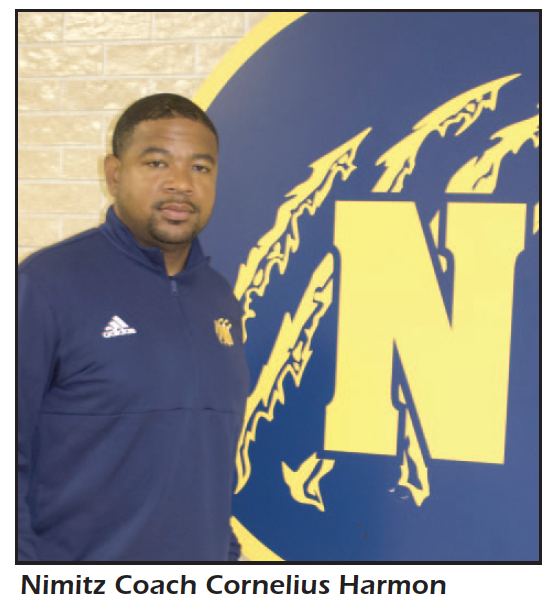 After he graduated from Texas Southern University, Cornelius Harmon was like a lot of young adults. He didn’t know what he wanted to do for a living. But a phone call changed all that and sent him on a career as a high school football coach.

Is he ever glad he took that call.

After starting for three years at quarterback for TSU, Harmon accepted a job at his high school alma mater, Port Arthur Memorial thanks to that phone call from his former coach Kenny Harrison.

He made quite an impression in his first stint as a head coach.

Because he did not start until March, Harmon did not have the Cougars go through spring training. Instead, they started falls drills a week earlier than most of their District 14-6A rivals. The Cougars got off to a slow start, but played well down the stretch and earned a playoff berth.

For leading Nimitz to a playoff berth and six wins in his first year on the job, Harmon has been named the Northeast News’ Coach of the Year for the 2022 season.

“I had a great relationship with my high school coaches (Harrison and Colbert),” Harmon said. “I’m glad I took that call. It worked out big time.”

Harmon said he was attracted to the Nimitz job because the community reminded him so much of his home town.

“This area reminded me a lot of Port Arthur,” he said. “It made me feel like I was back home.”

Harmon said he was proud of what his team and coaching staff achieved in his first year on the job and he plans on building on that success.

“Your goals never change. I want to win district and a state championship, and we wanted to be successful this year. We wanted to create our own narrative. When I got here, it was more important for me to get to know the kids and coaches. We spent time with the kids and I think we were able to relate to them. They realized I was here to help them be better players and be a better team. Before we left for the summer, we had 100% buy in.”

Harmon’s coaching philosophy is simple. Be disciplined, be physical and be fast. He brought with him the spread offense and 4-2-5 defense from his days at Summer Creek.

Now that he’s firmly entrenched as a high school coach, he lives by a quote by Pittsburgh Steelers head coach Mike Tomlin.

Harmon believes the future is bright for the Nimitz football program. The freshman team finished 8- 2 and the junior varsity enjoyed some success as well.

While he’s excited about the future, he said his first ever Cougar team will always have a special place in his heart.

“We’ve got a great group of kids coming up and I’m excited because they get my voice for the next four years,” Harmon said. “But I’ll never forget this great group of young men who trusted me and my philosophy. I wish nothing but greatness for them.”

Harmon said he firmly believes he made the right choice when Aldine ISD Executive Director of Athletics Dre Thompson offered him the job and he accepted it.

“I’m very happy with the decision I made,” Harmon said. “Aldine does a great job and I can’t thank them enough for giving me this opportunity. While winning is important, our ultimate goal as coaches is to build young men to be successful in life. The great thing about coaching, and the most satisfying thing about coaching, is you can have a direct impact on young kids.”

In his free time, Harmon likes to spend time with his wife Cheniska and his son Camben, 8, and Caleigh, 5. He also likes to fish.

If his first year on the job is any indication, the future does indeed look bright for fans of the Nimitz Cougars football team.