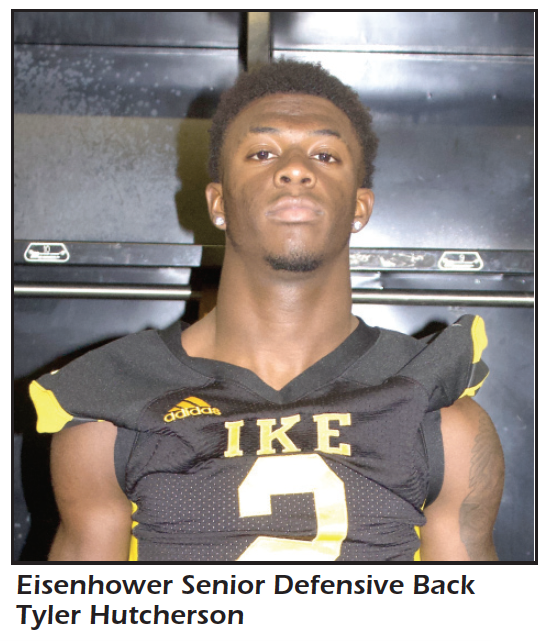 Eisenhower High School senior cornerback Tyler Hutcherson might not be the biggest guy on the football field, but he sure plays like it.

The 5′-9″, 160-pounder was a three-year starter for Eric Jackson’s Eagles as a defensive back.

During his senior season, Hutcherson recorded 45 tackles, 5 tackles for losses, broke up 16 passes and came up with two interceptions.

That big season by the likable Hutcherson earned him the Northeast News’ Defensive Player of the Year honors.

Hutcherson’s play also helped the Eagles reach the playoffs, which made his senior season all the more special.

“It (the season) was good,” Hutcherson said. “It was the best year we’ve had since I’ve been here.”

Hutcherson may not have ideal size, but he has one skill that has made him attractive to college coaches. He runs the 40 in 4.4 seconds. That’s really, really fast.

He’s not only a talented football player, but also excels at track, where he has been a three-year letterman (he’ll run for his fourth straight year this track season). He runs the 100-meter dash and is a member of the 400-meter relay team, which just missed going to state last year by finishing third at the Region II Meet.

Hutcherson has accepted an offer from Stephen F. Austin State University where he will play football and run track. Hutcheson’s decision to go to SFA is ironic because he has a number of family members who attended Sam Houston State University, SFA’s biggest rival.

“My family are Sam people, when I told them I was going to SFA, they said, ‘Aahh, no,’” he said, with a laugh. “I appreciate SFA offering me a scholarship. I’m one step away from my goal of going to college.”

Jackson said the Lumberjacks will be getting an aggressive defensive back who has good coverage skills and has blazing speed.

“Tyler is very aggressive and is a fundamentally sound defensive back. Tyler also has good quickness and good feet and he’s a solid tackler,” Jackson said. “He loves to play football and he’s a very humble young man.”

He also returns punts, one more tool to help his future team.

Jackson added Hutcherson isn’t a big talker on the field. He lets his play speak for him.

“Tyler is a low key kid,” Jackson said. “He leads by example.”

Jackson added SFA will be getting a player who can help them as a freshman.

“SFA’s gain is our loss,” Jackson said. “I’m very happy for him. He’ll do everything that his coaches ask of him. He’ll be an asset.”

“He needs to get a little better on his technique, but Tyler will work on that,” Jackson said. “As a cornerback, you have to have a short memory and he did a good job of that if he got beat. He also needs to be a little more vocal in the secondary, but that will come with time and more practice.”