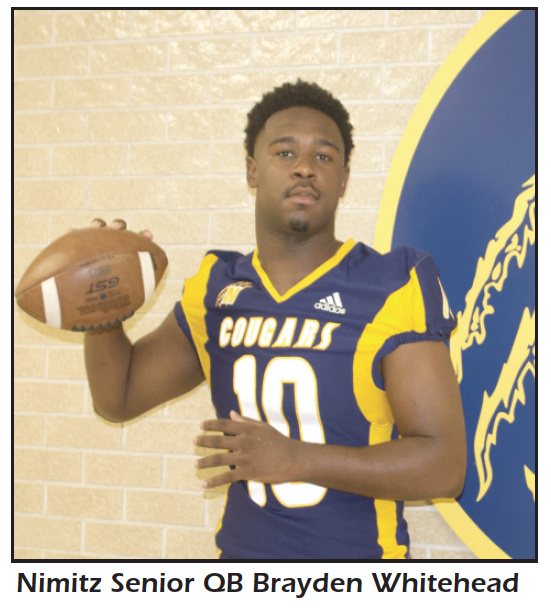 First-year Nimitz High School head football coach Cornelius Harmon did his homework before accepting the job last spring. He researched the team’s roster and once he discovered he had a big-armed quarterback with two years of experience, he was sold on the job. And on senior quarterback Brayden Whitehead.

As a senior Whitehead threw for 2,389 yards, completing 157 passes and he tossed 28 touchdown passes. He also picked up another 121 yards on the ground and four more scores.

Whitehead helped lead the Cougars to a second straight playoff appearance and a six-win season. That effort earned him the Northeast News’ Offensive Player of the Year.

Harmon said Whitehead definitely has talent, but he possesses a more important trait that a quarterback needs: leadership.

“Brayden is one heck of a player,” Harmon said. “He’s a true leader, a natural born leader. He was a bridge between me and the team. We would talk on a daily basis and he would share with me how his teammates felt about the change (of coaches). It was a good thing for me and the team. Brayden definitely helped stabilize things. Our relationship was close.”

The 6’1″, 215-pounder is a three-year starter and letterman. He hopes to continue playing football in college. He has received offers from Midwestern State in Wichita Falls, Navarro College, and other schools.

When Harmon was the offensive coordinator at Summer Creek, he saw Whitehead play in seven-on-seven tournaments during the summer. Watching him perform in those seven-on-seven games made Harmon’s decision an easy one when he was offered the job to be the head coach at Nimitz.

“I knew he was coming back and I’d seen him compete against other teams in those seven-on-seven games. I had a pretty good idea of who he was,” Harmon said.

Harmon said Whitehead’s strength is his strength and strong right arm. He needs to improve on his 4.8 time in the 40 to compete at the next level.

That’s why Whitehead, who likes to watch Buffalo Bills quarterback Josh Allen ply his trade on Sundays, is passing on playing basketball his senior season to concentrate on improving his speed.

“I need to get faster and more explosive,” Whitehead said.

He hopes running track this spring will help him improve his speed. Whitehead runs the 200-meter dash for the Nimitz track team.

As for his leadership skills, Whitehead said he learned those from his parents.

“That comes from my parents,” he said. “They taught me to be a leader, not a follower, to follow my own path.”

When asked if he was looking forward to playing college football, Whitehead quickly responded, “Yes sir, without a doubt.”

And let’s hope he gets to do just that!