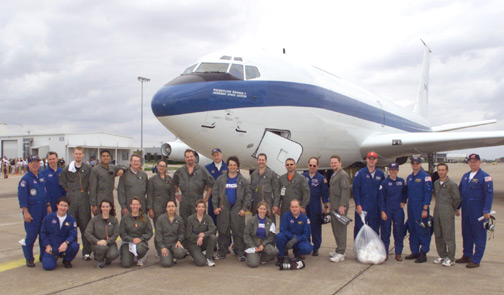 Both teams, under the guidance of Dr. Robert Keating, biology instructor and chair of the HCC-NW biological sciences department, along with faculty advisors, Drs. Judith Solti, Richard Merritt and Ed McNack, are now presenting their project results to Houston area middle and high schools to encourage student interest in science and space.

If were going to travel and live in outer space, says Philip Pablo, well need to know how to grow food in zero gravity conditions. This experiment will help determine which nutrient solutions are best suited to long-term hydroponic plant growth.

Elodea camidensis is an aquatic perennial whose thin leaf and chloroplast and cytoplasmic streaming are easily observed under a microscope.

The students mounted fresh samples of Elodea leaf on slides prior to the flight.

A microscope attached to a video camera and recorder monitored the morphology of the leaves for later analysis. Control experiments were conducted simultaneously on the ground. Additionally, fresh Elodea plants were flown in three separate containers of isotonic, hypertonic and hypotonic solutions that were placed in a flight bag and observed post-flight for structural changes.

The in-flight slide samples revealed that the G forces associated with takeoff alone were sufficient to cause some changes in the cellular morphology of the Elodea leaf.

The team surmised that changes in cell shape during the flights might be attributed to the chemical nature of the cell wall. Plant cell walls are made of cellulose, which shows a considerable amount of resilience that could change in response to varying gravitational environments. Though the effects of normal gravity on the orientation of plants are well established, the results of marked changes in gravity on plants are not as clearly defined
The contained Elodea samples in three solutions yielded similar responses to the slide samples, namely that cellular changes were more pronounced than in the control samples. The results of these experiments provide some initial information on cellular alterations that could impact sustaining plant life over long-term space travel.

Students Kimberley McMahon, Chip Kaiser, Philip Lanham, Angela Mills, and Julie Vaught developed an experiment to compare the effect of reduced gravity on the vital signs of students compared to those obtained in a normal gravitational environment.

Using a computerized Biopak student physiology unit, they were able to take multiple measurements – pulse rate, reflex reaction times, and electrocardiography – with one apparatus
Alternating as subjects and observers on the flight, the students performed various actions throughout the 0G to 2G range while tethered to the Biopak. Their initial hypothesis was that the human body would show increased effects of stress during 1.8G to 0G; conversely, 0G will produce decreased effects in the human body as compared to 1G (control).

Control data was obtained from the subjects in a seated, relaxed position several weeks prior to the flights. The flight data was recorded on the test subjects in various positions during 0G and 1.8G. Control and in-flight procedures were the same. The subject was connected to three sensors that monitored the physiological responses and led into a transducer that relayed the information to the computer. The flight observer set up the software, calibrated the computer for data recording, operated the apparatus and monitored the subject.
Flight data was recorded on the test subject in three positions. The first ten parabolas were in the standing position, the second ten were in the sitting position and following five were in the reclining position.

In general, the subjects ECG was elevated during the entire flight, as compared to normal (1G) control readings. The subjects pulse rate was elevated during the 1.8G and 0G segments. The 1.0G control data showed lower pulse levels.
The subjects respiration was depressed to the point of a flat line at times (0-volume exchange) during the 1.8G phase. However, the 0G phases produced a wide and exaggerated respiration spectrum versus the control rate that revealed a rhythmic pattern.

During both the 0G and 1.8G, the galvanic response showed a wider range with the occurrence of peaks.
By comparison, the control data remained at a constant level.

Chip Kaiser noted, Although the human body does not much like the shock (initially heart rate increases as does galvanic response, and respiration is labored under 2G) eventually the body adjusts.

At least that is our preliminary finding. Overall, 2G is more demanding short term, but long term it all seems to balance out.

The team determined that variations in the physiological responses of the subject could be due to several factors other than gravitational force fluctuations, such as age, flight experience, level of apprehension, effect of medication, amount of rest, food intake, environmental in-flight variables and hardware sensitivity
Post-flight data analysis revealed the initial hypothesis was not completely substantiated.

During the 1.8G conditions there appeared to be an accentuation of the physiological stresses when compared to 1.0G.

The presumption (that 0G would be less stressful than 1.8G was not correct. Based on these preliminary observations, it appears that different gravitational conditions do alter the physiological responses measured in this experiment, but further experimentation with more subjects is needed to more precisely analyze these responses.

The data collected from these experiments will benefit NASA and others by providing a supplemental reference; the data will be presented at scientific meetings and published in scientific journals.
Donn Sickorez, University Affairs Officer at JSC, points out that the Reduced Gravity Program tends to have a maturing affect on participating students.

The students proposals are evaluated on scientific merit, feasibility of the design, test and fabrication plan, compliance with NASA experiment safety protocols, and the teams education and outreach plan. They quickly realize this is a real world, adult experience and it changes them.

In fact, each team is required to develop a program for sharing the results of its experiment with teachers, students and the public after the flights. Teams must analyze their data, prepare education and information materials, and submit post-flight reports.

The Reduced Gravity Student Flight Campaign is sponsored by NASA and administered by the Texas Space Grant Consortium.