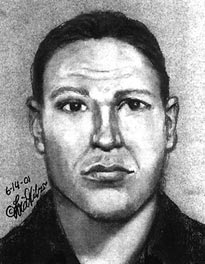 This weeks Crime Stoppers report involves the aggravated kidnapping and aggravated sexual assault of a woman in Humble.

On Tuesday, May 8th at approximately 9:00 p.m., a female custodian was abducted at gunpoint from the campus of Humble High School in the 1700 block of Wilson Road.

The victim had gone to the dumpster located in the parking lot to empty some trash when the suspect drove past her in a blue, four-door passenger car. He made a U-turn and came to a stop next to the woman, produced a pistol and demanded that she get into his car.

Fearing for her life, she did as she was instructed.

The suspect drove to a nearby isolated field on Mitchell street where he pushed the woman to the ground and sexually assaulted her.

After the assault, the suspect spit on the ground next to the victim and left the scene in his car.
Fearing that her attacker would return, the victim ran back to the high school for help. She was taken to a local hospital, treated for her injuries and released. Anyone with information in regards to the case or on the identity or location of the suspect or suspects responsible for this aggravated kidnapping and aggravated sexual assault is urged to call Crime Stoppers.

The suspect is described as a White man, 38-40, 58-6, with shorth brown hair. He was driving a blue 4-door car with bucket seats, possibly a Chevrolet Corsica.

Crime Stoppers will pay cash rewards of up to $5,000.00 for information that results in the arrest and charging of a suspect or suspects in any felony crime.

Tipsters may receive as much as $5,000.00 in specific felony cases where the public is deemed to be at a higher risk of being victimized.