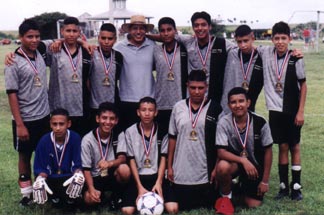 While many sports fans are worried about college football or the NFL, a group of young men at Hambrick Middle School are taking the true meaning of foot ball to new heights. The team is called The Atlas. They are on top of the world as they get ready for the Eastern District playoffs in Kingwood during the first week of December.

The Atlas, under the coaching leadership of Hambrick Assistant Principal Reuben Mares has enjoyed a successful year. With a 7-3 record and a couple of tournament championships under their belt, the Atlas won their bracket in the Divisional playoffs for 15 year-olds in the Soccer Club competition. Its tougher at the club soccer level than at the recreational level, said Mares.

That means the victories are harder to come by. The team organized in June and bonded as a team that effectively works together on the field. Theyve done very well! This is something that not only builds self-confidence and leadership but it spills over into the academic areas of the classroom. Mares said proudly. Coach Mares requires his team members to be passing their classes to continue on the team. Under state law, students who take part in extra-curricular activities must be passing all classes.

However this particular soccer team falls outside of the organized school team athletics. But Mares still maintains the standard, keeping his student athletes motivated in the classroom and on the field.

If the Atlas is successful, the team of up and comers will advance to the state competition. That means going up against some of the best teams in Texas. The Atlas is organized under the Conroe Youth Soccer league but the team is made up of youngsters who come from the area around Aldine Mail Route and Hambrick Middle School. The entire competition is overseen by the Texas Youth Soccer Association.

So move over BCS, move over NFL and NBA, these guys are getting a kick out of winning and may prove to be the lone star over Texas in soccer. But win or lose on the field, they have already proven themselves champions in heart, attitude and effort!