After reviewing surrounding district calendars, the information provided by the Texas Education Agency, and input from the calendar committee, the district has determined that it will operate under the approved 2020- 2021 academic calendar.

“The calendar process we used this year took into account several levels of feedback from our stakeholders. When developing the calendar we weighed in district needs and alignment to our goals,” said Aldine ISD Chief Communications Officer Sheleah D. Reed, APR. “We believe the calendar we have will allow us to address the needs of students.”

The calendar which was voted on by trustees Feb. 11, has the first day of instruction set for Monday, Aug. 17. The last day of school is May 27. The calendar exceeds the state’s requirements for the minimum number of minutes. Those minutes can be used to accommodate school cancellations.

Other key dates are:

END_OF_DOCUMENT_TOKEN_TO_BE_REPLACED 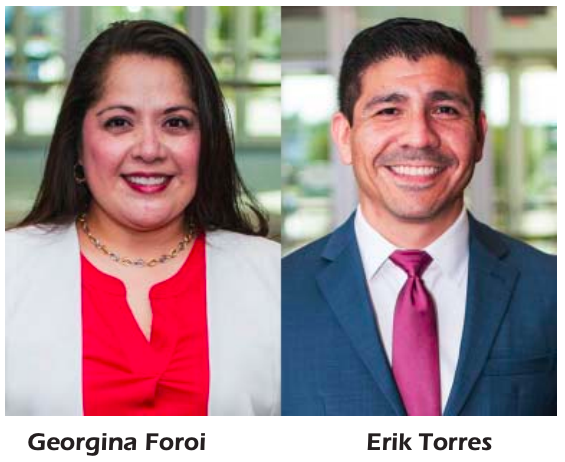 Aldine ISD is pleased to announce that Erik Torres and Georgina Foroi have been selected as the new principals for Ermel Elementary and Sammons Elementary, respectively. Both will continue to fulfill their roles as assistant principals at their respective campuses, Goodman Elementary and Kujawa Primary, through the end of the year while transitioning to their new roles.

Foroi will ensure several tasks and projects are completed at Goodman Elementary before she leaves, while also meeting the teams at Sammons Elementary to develop plans for the 2020- 2021 school year. Torres will also begin working with his staff at Ermel.

Dr. LaTonya M. Goffney, Superintendent of Schools, stated, “Leadership matters. Both Georgina and Erik are amazing. Their experience, commitment to student success, understanding of how to support teachers, and their skills to build strong relationships, are evident in their work. These skills are crucial for effective change and improved outcomes. We are looking for these characteristics in leadership as we build on our strategic plan to ensure our students have access to high-quality schools and learning experiences.”

END_OF_DOCUMENT_TOKEN_TO_BE_REPLACED 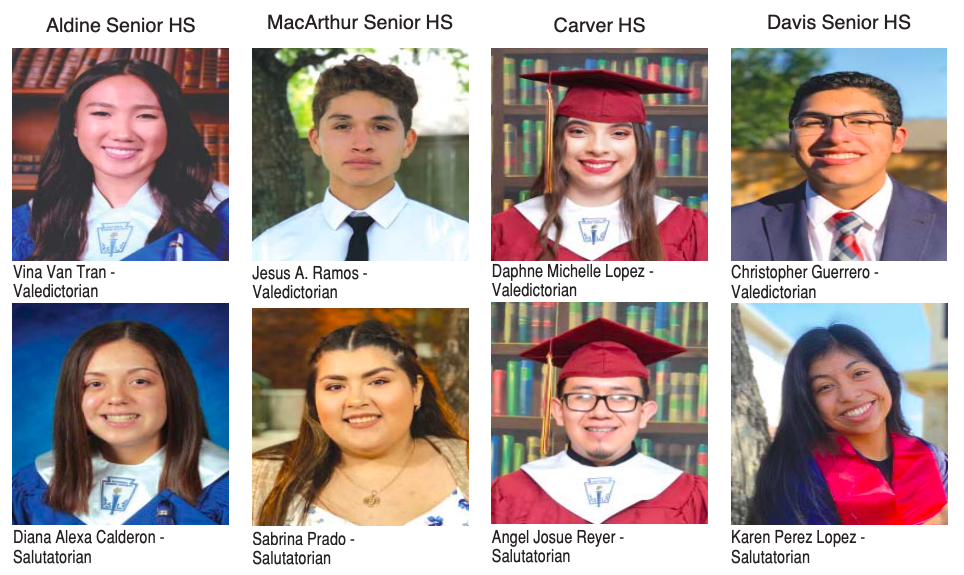 Aldine ISD has 18 students in the Class of 2020 who have achieved valedictorian or salutatorian honors. To obtain this recognition, the students had to work exceptionally hard, maintain focus throughout high school.

“We are excited to honor and recognize 18 outstanding senior students in the Class of 2020 as our valedictorians and salutatorians,” Superintendent Dr. LaTonya M. Goffney said. “I am happy to acknowledge our valedictorians and salutatorians for maintaining an impressive academic record during their educational journey. We applaud you and we are confident that each of you will continue to be successful in everything you choose to do.” 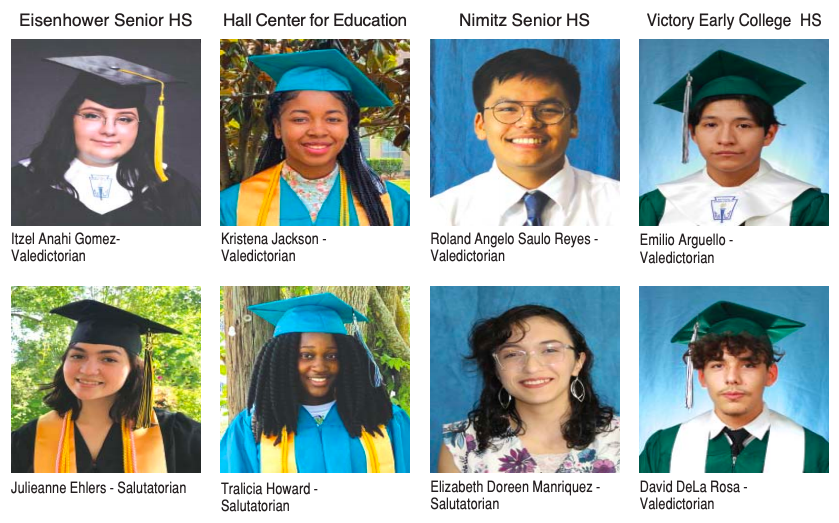 The Aldine ISD Board of Trustees approved a resolution to establish updated guidelines to that create local policy guiding class rank and honors during their March 24 board meeting. The action was taken to guide parents and students while the district is closed due to the COVID-19 pandemic. It is specific to students who are part of the Class of 2020.

END_OF_DOCUMENT_TOKEN_TO_BE_REPLACED

AISD school nurses use their talents to create hundreds of masks

When Maisha Guillory, Aldine ISD program director of health services, presented a challenge to her school nurses, she was overwhelmed with the response. And did they respond in a big, big way!

Guillory asked a number of AISD school nurses to create masks to help protect district employees while they distributed Chromebooks to Aldine ISD students April 15 and 17. The masks were used as a preventative in response to the Covid 19 pandemic.

“I am so proud of our nurses,” Guillory said. “They stepped up to the plate and used their talents to create hundreds of masks for their fellow Aldine employees. They not only tend to the needs of their students, but they came to the aid of Aldine’s staff and the community as well.”

END_OF_DOCUMENT_TOKEN_TO_BE_REPLACED

The Aldine Independent School District Superintendent Dr. LaTonya M. Goffney is taking proactive measures against the coronavirus/COVID-19 to minimize risk to students, employees, and families relating to the spread of the coronavirus.

There are increasing cases of coronavirus confirmed in Harris and surrounding counties. The school district confirmed that these cases do not include students or employees of the school system.

“However, considering the virus is now confirmed in our county, we are taking additional steps to minimize risk to our students and staff,” Goffney said. “Our school district is following the Centers for Disease Control’s (CDC) guidance for schools. This includes making sure that our emergency operation plans are reviewed and up-to-date and that there is routine environmental cleaning. AISD uses cleaning products that have been verified by the manufacturer to kill viruses. Out of an abundance of caution, we are developing a plan to limit ‘non-essential’ school activities and travel to lessen the risk of exposure. We have set a date to reopen schools after the Easter/spring holiday in April, but we are evaluating the situation daily.

END_OF_DOCUMENT_TOKEN_TO_BE_REPLACED

Aldine ISD celebrated its top teachers and principals at the Boots and Bling Educator of the Year Breakfast, held Friday, March 6 at the Hilton North Houston Hotel.

His visit highlighted the Trump Administration’s goal of ensuring every high school student in the United States access to CTE programs that provide high-quality pathways to success after graduation.

“Everyday we work hard to demonstrate what’s possible for our students,” Dr. Goffney said. “We want them to have choices and at this beautiful campus provides them with a myriad of choices.”

Blanson Principal Ben Ibarra shared information about the school, which opened in August of 2018. Ibarra told the deputy secretary that in its first year of existence, the school earned an “A” rating from the Texas Education Agency. In addition, last year Blanson students earned 604 industry certifications and had a 97% attendance rate.

END_OF_DOCUMENT_TOKEN_TO_BE_REPLACED

Aldine Education Foundation will host its first Sports Spectacular for Scholars featuring the Harlem Wizards vs. Aldine All-Stars. The Wizards, known for their amazing basketball talent combined with hilarious comedy, will tip off against Aldine ISD teachers, coaches, and community leaders to provide a fun-filled evening of basketball hi-jinx. The event will take place from 7 to 9 p.m. on Wednesday, January 22, 2020, at M.O. Campbell Educational Center, 1865 Aldine Bender Rd, 77032. Doors will open at 6 p.m.

The Harlem Wizards have a mission to create awe-inspiring events throughout the country to help communities raise funds for important causes. Wizards games provide two hours of family time where grandparents, parents, and kids can all laugh together. Even in the stands, you are more than a spectator. The audience becomes a part of the show and there is a guarantee of loads of laughter and audience participation. Throughout the game, fans will experience a magical display of tricks, coordinated ball-handling, fancy passes, and aerodynamic athleticism combined with high-energy comedy and guest interaction.

END_OF_DOCUMENT_TOKEN_TO_BE_REPLACED

Many of the schools and buildings in Aldine Independent School District are named after individuals that left an indelible mark in the community. Superintendent Dr. LaTonya M. Goffney reached out to the district’s many namesakes to honor them and let them know their spirit for giving students the best educational experience continues.

Dr. Goffney also took a moment to share the new choices and opportunities AISD offers students, the five-year strategic plan, current work, and how it all impacts the future of Aldine.

END_OF_DOCUMENT_TOKEN_TO_BE_REPLACED

The primary goal of the School FIRST system is to ensure that Texas public schools are held accountable for the quality of their financial management practices. The School FIRST system is designed to encourage Texas public schools to better manage their financial resources to provide the maximum allocation possible for direct instructional purposes.

The School FIRST system has 15 indicators that are evaluated. The first five indicators are critical indicators and must be met to avoid failure. The other 10 indicators evaluate financial solvency and financial competency.