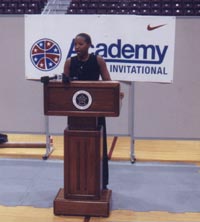 Aldine ISDs M.O. Campbell Center will play host to 16 of the nations top boys high school basketball teams in the inaugural Academy National Invitational presented by Nike, Dec. 26-29. The field will consist of an elite division of eight teams from across the country that will make up the National Division and a division of eight teams from the Houston area that will make up the Texas Division. All games will be played in the state-of-the-art 4,700 seat Campbell Center.

We are fortunate to bring this event to Houston, said Hal Pastner of Vision Sports who will serve as tournament director. Everybody wanted this tournament, but this facility was the real clincher. When the folks from Nike saw this great facility, they were sold that this was the right place for the tournament.

Pastner made his remarks during a press conference held Dec. 5 in the Campbell Center. Also on hand for the event was former Houston Comets star Cynthia Cooper, Houston Rocket Catino Mobley and Tony Dorado, Nikes director of high school basketball.

Pastner added the tournament field is loaded with exceptional teams, which should excite local basketball fans.

We are excited to host a tournament that will have an outstanding collection of high school basketball talent from across the country and around the state of Texas, Pastner said. The city of Houston is honored to host this event and we hope this is the beginning of a long relationship with Academy Sports & Outdoors and Nike that will result in this tournament becoming the premiere national high school basketball tournament.

The National Division will feature seven teams ranked in the Top 25 by both USA Today and Street and Smith magazine. That division includes the nations defending national champion Oak Hill Academy of Virginia, which is led by National Player of the Year candidate Carmelo Anthony (6-8). From the other side of the tournament bracket and country is powerful Westchester High of Los Angeles, which is currently ranked No. 1 in the country. They are led by 6-4 Hassan Adams and 6-3 Brandon Heath, both top 50 seniors in the class of 2002.

Texas and the Houston area will also be represented in the National Division by Beaumont Ozen, which finished 36-0 last year and won the Class 4A state title. Ozen is led by 6-11 junior Kendrick Perkins, considered to be the top junior in the country.

Other National Division teams in the field are Midwest City High (Oklahoma) with 6-8 Sheldon Williams and Male High (Louisville) led by 6-3 junior Michael Bush, who is also considered the state of Kentuckys best football player. Rice High of New York will be on hand with 7-3 junior Shagari Alleyne and from across the river in New Jersey, St. Patricks High will also be in Houston to open the tournament Dec. 26 against Midwest City. St. Patricks is led by 6-10 big man Grant Billmeier. Rounding out the National Division will be DeLaSalle High of Concord, CA.
The Texas Division will feature two Aldine ISD teams, Eisenhower High and Nimitz High. Nimitz is led by 6-7 Cartier Martin, while Eisenhower is led by 6-7 Dontay Jackson. Other teams in the Texas Division will be Westfield High, Westbury Christian, Heritage Christian, Texas City, Clements, and Cypress Springs. Nimitz will open the tournament on Thursday, Dec. 27 at 1 p.m. against Cypress Springs, while Eisenhower will open tournament play on Dec. 27 at 5:30 p.m. against Westfield.