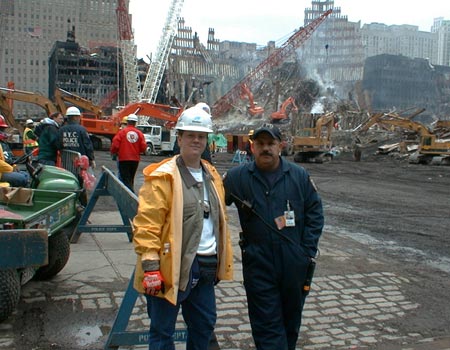 To get to Ground Zero in Lower Manhattan, New York City, from my home in Alvin, Texas, takes an hour-long car ride, a three-hour plane trip, a bus, a train, a subway, and a long walk down deserted city streets. I dont know what made me go to New York, but something pulled me there, something called to me and told me to go.

What breaks your heart: Missing person posters, faded with rain and time. The devastation on firefighters faces. Memorials covered with flowers, stuffed animals, patches from other police departments and fire agencies. Letters from families left at the memorials that begin, Dear mom. Uptown New Yorkers on the subway who are smiling and laughing until you step into the car covered in mud, wearing a hardhat, and suddenly you have brought Ground Zero into their neighborhood. The Navy Chaplain who came to New York as a volunteer and in the first 10 minutes he is overwhelmed. He tells me, This is hell. This is hell. The firefighter who tells me, There are 6,000 people in there. Where are my friends? Where are my buddies? as he stares at the massive pile of rubble that will not fit neatly into a television screen. Thinking youve left Ground Zero until you look up and see the peripheral damage to the buildings, blocks from the site. Walking into the hotel on the border of Ground Zero and stepping ankle deep into papers, dust and broken glass. The police officer who tells me, I know I was here the first day, but I cant remember what I did. I cant remember. I cant remember. Knowing that everything youve seen is nothing like the destruction of the first day.

What makes your heart sing: The Red Cross, the Salvation Army, the many volunteers who work around the clock to provide comfort to those at Ground Zero. Mass everyday at 4 p.m., prayer stations, chaplains, stacks of bibles left at memorials, rosaries lying right next to granola bars to feed the spirit as well as the stomach. Ninos and other New York restaurants cooking around the clock and sending the hot meals that make all the difference in the cold and the rain. The crew at McDonalds that brings food and drinks directly to the workers so they dont have to leave the site. New Yorkers on the subway who say, Thank you, and God bless you, and mean it. Therapy dogs getting fat from too many treats. The police officer who asked me, Where should we put our Christmas tree? and the realization that the NYPD and FDNY are not leaving until all the victims they can possibly find are brought out of the tomb. The ironworkers, the carpenters, FEMA, OSHA, and the many people not in uniforms who are working so hard to get the job done. The 200 foot flag painted on the asphalt of a dead end street so that planes flying overhead can see it and know that New York is grateful, New York has hope. The T-shirts that say, I still love New York. The firefighter from Queens, Rescue Four, who literally gave me the shirt off his back.

The E-mails from NYPD officers, still working at the site, thanking me for coming and asking, When can you come back? And the feeling that, given the chance, I would hop the first plane to Newark, ride the bus, the train, the subway, walk the long city blocks and do it all over again.