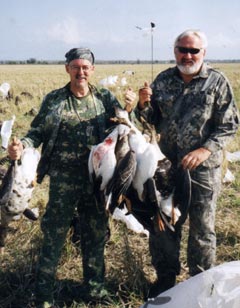 Over the years, I have been lucky enough to be invited to the Blue Goose Hunting Club (979-234-3597) in Altair, Texas. Each trip was always an enjoyable stay and a great hunting experience. Last weeks venture to the Blue Goose was no exception.

The Blue Goose has got to be one of the oldest and most historic hunting clubs on the Texas Coast. No one is too clear on exactly when they started taking in parties of hunters for guided waterfowl hunts, but it has been more years than most of us can remember. The chief cook and all-around hand, Shorty, proudly proclaims that he came to the Blue Goose in 1949. He has served up choice steaks and pre-dawn breakfasts to celebrities and famous outdoor writers as well as hoards of seasoned waterfowl hunters during his 50+ years at the Blue Goose.

It was a crisp, sun-drenched fall day the afternoon I arrived. Marty Malin of Laredo, vice-president of the Outdoor Writers of America, and Jonette Childs of Rockport, editor-publisher of Saltwater Texas newspaper, were already there. Marty, a long-time friend, had just driven in from Kansas and was anxious to share the details of an exciting wild pheasant and prairie chicken hunt on the Kansas prairies.

The top gun of the Blue Goose, John fields, walked in to welcome us. John came to the hunting club as a young waterfowl guide in 1956 under Marvin Tyler, the founder and original owner of the Blue Goose. John took over the operations of the club almost 20 years ago and has been hosting hunters ever since.
During the next couple of hours, other members of our group trucked in from all over the state to join us for the next mornings planned goose hunt. That evening, Shorty outdid himself by serving up heaping platters of seafood and choice sizzling steaks to the group.

The socializing hours that evening were not lengthy ones. From experience, the more salty members with a touch of gray in their beards were all too familiar with an agonizing 4:00 am wake up call to go to the goose fields.

We found our way to our assigned sleeping quarters in the complex of roomy mobile homes located behind the club and restaurant. Each mobile home is complete with beds and separate bedrooms and all the comforts of home, including TV, a kitchen, and cooking facilities.

The next morning, we rolled out to the early wake-up call. We gathered in the dining room to meet our congenial guides and have a hearty breakfast with lots of black coffee. Then we followed the guides in an orderly caravan to the hunting fields.

It was not your usual late November goose hunt. The weather had turned warm and balmy. It was not long before I wanted to shed the extra layer of clothes I had slipped on under my camo as a precaution against a morning chill.

In fact, it was hot! It was especially warm after setting out a large spread of white and brown rags and a few elevated goose decoys in a freshly cut field of rice stubble. Adding to the already muggy conditions, there was almost zero wind. We still settled into the front edge of the spread in the pre-dawn darkness with the typical amount of hunters optimism. We waited for the dawn and waited for the geese to start flying.

A light haze hung over our field as dawn crept in. The first goose to check out our guides calls was a lone specklebelly that came sailing in low out of the mist. All shotguns were aimed on the lone goose. Out guide gave the signal to take im!
Shotguns blasted! Shot loads flew! So did the goose! The big goose made one wide sweeping turn as if taunting all the shotgunners.

There was a lot of good-natured finger pointing and laughter as the goose made his way, unscathed, to the distant horizon. My feeble claim, I didnt even shoot! was met with a lot of skepticism and even more laughter.

The next goose was not so lucky. A low flying specklebelly was cleanly dropped by a shotgunner on the opposite side of our spread.

Early in the hunt, a snow goose came flying in with cupped wings on my side of the spread. After the first volley of shots, the big goose realized he had been fooled. Frantically, he tried to change direction and gain altitude. One last desperate shot of triple bbs from my old Browning humpback caught up with the big white goose, and he collapsed in mid-flight. The bird dropped into the rice stubble with a solid thud.

Our group spent the morning shooting at enough singles, doubles, and small flocks to make it a fun hunt. The goose season has been open for almost a month, and many of the geese we were hunting have had more than one load of steel shot whiz past their heads. The birds were extremely spooky, and the larger flocks flew high and well out of shotgun range.

It had been another memorable hunt to the Blue Goose Hunting Club.

I returned with enough plump geese on ice for the main attraction of several holiday dinners this year.