The Black Drum: A Great Game Fish That Gets No Respect 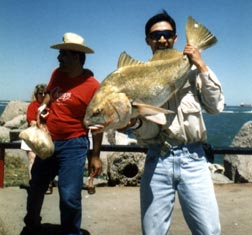 What if I told you about a fish that can be caught year round in Texas waters, is abundant on the entire coast, and offers great sport fishing on light or medium tackle? It is a member of the croaker family and is closely related to such respected gamefish as the speckled trout, the golden croaker, and the redfish. Depending on its size, it is great tasting on the table.

The fish is ignored, misunderstood, and even scorned as far as sport fishing is concerned.

The drum is remarkably tolerant of water and temperature extremes. They are found in large numbers in very shallow water in the Laguna Madre of South Texas during hot summer months, yet they survive better than most fish in freezing weather. During major freezes, only a fraction of the drum are killed compared to the less hardy speckled trout, redfish, and sand trout.

The black drums reputation as a sport fish has long suffered in the past when compared to the regal redfish and the super-star status of the speckled trout. Skill and expensive tackle is not necessary for the drum, and they are within easy reach of piers, jetties, and wade fishermen as well as boaters.

Tackle for the black drum can run from rod and reel to cane poles. A favorite bait is frozen shrimp tails. These fish can be caught in water ranging from clear to just plain muddy. Keep in mind that the drum feeds mostly by smell, so fishing for them is sometimes the best when the water is murky or sandy.

The drums reputation is probably wrongly tarnished the most at the dinner table. Smaller drum under 6-8 pounds, properly cleaned and prepared, can be choice quality, Of course, as with many finfish, the older and bigger a fish grows, the coarser the flesh becomes.

Probably, the biggest strike against the black drum is the presence of parasites. Larger fish called bull drum over about 15-16 pounds almost always host what is called spaghetti worms. These parasites are always located along the backbone at the base of the dorsal fin. As unappetizing as the sight of these worms is, they are not harmful to man and do not affect the flavor of the fish.

Careful cleaning and selective trimming of this area will help avoid offending guests at your fishfry, especially if they dont have prior knowledge of the discarded parasites. As it is with much food preparation, a lot of it has to do more with psychology than with taste.

Just for the record, highly revered speckled trout and the regal redfish can also host the spaghetti worm parasites. In the case of trophy trout, they are not as large or visible as those found in the black drum and are usually overlooked. Out of sight, out of mind.

Black drum are prolific spawners and look for love in the bays, the Gulf, and the connecting coastal passes. The random release of eggs, called free spawning, occurs mainly during February through April.

Strictly a bottom feeder, the drums barbells (chin whiskers) are used to locate food by feel and smell. A drum sometimes stands on its head, rooting and feeding on the bottom for mollusks, small crabs, and other marine life. These actions are similar to those of his tailing redfish cousins.
Coloration of these fish varies greatly, depending on surrounding waters. Young fish up to about a pound or so are nicknamed puppy drum. For about the first three years of life, puppies have four or five dark vertical stripes. The bars on the larger fish and those pulled from Gulf waters are generally a faint gray. Drum caught from murky bayous, channels, or boat basins have distinctive stripes that are almost jet black.

The dark bars vanish as the fish grow older. The color base of bigger fish varies according to the waters. Those taken from the Gulf have light gray or silver sides with a white belly. Big drum caught in the bays have dark gray sides and may have a bronze tint along their backs.

When you hook into a heavyweight drum, you will find the fish to be a hard fighter. But the fight will be different from that of a redfish. The redfish is far more streamline and will make fast, long runs. The drum is thick and built more for power than speed. Instead of long runs, the hooked drum will more often make deep, powerful circles.
In the eyes of many avid saltwater anglers, it is still hard to drum up much support for the black drum. However, the fish remains one of the best chances to hook up with a hard fighting 30-40 pound gamefish.

It is also a good chance to serve your guests some thick fish steaks drenched in a garlic, lemon and butter sauce. Furthermore, if you dont tell them it is a black drum, they will never know the difference.