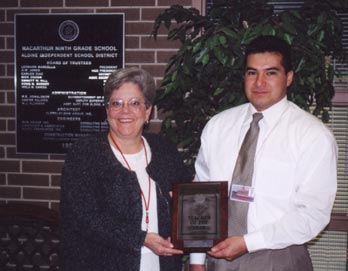 Almendarez, raised in Carrizo Springs, Texas, graduated from the University of Texas at San Antonio in 1994 with a degree in mathematics. Following graduation he returned to his hometown of 6,000 where he taught eighth grade algebra and coached football, cross-country, basketball, and baseball.

In addition, Almendarez taught at night in an adult literacy program. Almendarez credits his parents with instilling in him the importance of education in a community where an education was not regarded as a top priority. Encouraged to pursue his education beyond a high school diploma, his parents never asked him whether he would attend college, but which college he would attend. They taught him that an education could never be taken away and that knowledge was power. Almendarez taught in Carrizo Springs for five years.

In 1999, Almendarez moved to Houston to further his education. He is currently attending Sam Houston State University where he is completing a mid-management graduate degree. In his eighth year of teaching, Almendarez admits he has loved every moment. Each year he reflects on the past year and sets higher goals for the following year.

Almendarez feels that teachers play an important role in a childs education by supporting, encouraging, and facilitating learning. Teachers must work as a team to plan, organize, and develop strategies that will have a positive effect in the classroom. According to Almendarez, each child should be given the same opportunity to learn, regardless of sex, race, or disability.

Almendarez is very honored to be the MacArthur Ninth Grade School Teacher of the Year and is looking forward to representing his school at the district level competition.

Almendarez and wife Ruby are expecting their first child in early July.