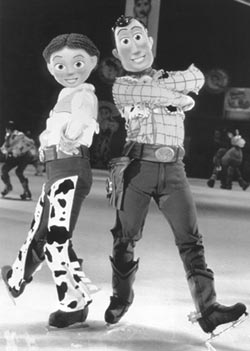 Hold on! Theyre coming! The easy-going cowboy Woody and high-flying space ranger Buzz Lightyear are back in town in Disney On Ice presents Disney/PIXAR s Toy Story 2. This live, all new, all skating, comedy-action-adventure visits Houston from March 20 to March 24, performing for 8 engagements at Compaq Center.

The toys from Andys room Woody, Buzz, Hamm, Slinky® Dog, Rex and others  are sent into a panic when they learn Andys mom is planning a dreaded event, a yard sale. The heroic Woody rescues Wheezy the Penguin, but is abducted by Al, the nefarious proprietor of Als Toy Barn. Al recognizes the sheriff as a valuable collectable and plans to sell Woody and the rest of the Roundup Gangsidekick Cowgirl Jessie, loyal steed Bullseye, and Prospector Pete  to a far-away toy museum at a big price. Woody is torn between leaving behind Buzz and the rest of the plastic posse, or returning to Andy. Its up to the intrepid space ranger to lead the mission save his friend and to show the confused cowboy that the greatest value for a toy is the love of a child. Toy Story 2 promises to take audiences  TO INFINITY AND BEYOND!