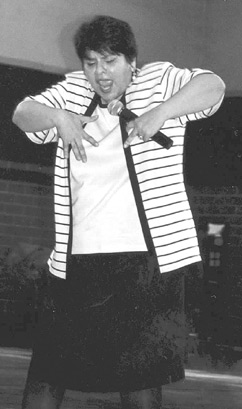 LTC Kickbusch, speaking in a combination of Spanish and English, told the assembly the stories of four teenagers, who decided to be followers rather than leaders and suffered life-altering consequences for their decisions.

One, a 13-year-old gang member in San Antonio, was shot and paralyzed for life in a drive-by shooting. She told about a young girl, pregnant and abandoned by her boyfriend, who wound up in prison for the negligent death of her baby. And another, lazy and abusive, who realized when her mother died in a traffic accident and she was placed in foster care just how much she had to lose.

The stories were accompanied by LTC Kickbuschs constant movement, swaggering and dancing, pantomiming the actions of teenagers much like those she was addressing. Everyone was mesmerized.
The story the Lieutenant Colonel did not tell in detail was her own; how she was born and raised in a barrio in Laredo, one of ten children who have become successful in spite of poverty, humiliation and illiteracy problems.

She graduated in 1976 from Hardin Simmons University in Abilene where she earned her degree in Law Enforcement and her ROTC commission as a Second Lieutenant to become the first woman commissioned as a ROTC officer in the state of Texas.

She holds an advanced degree in Cybernetics from San Jose University (California.) Her military education includes completion of the Army Command and General Staff College and Department of Defense Program Management Executive Course.

LTC Kickbusch has held leadership positions in a wide variety of organizations and has been honored with numerous awards including Legion of Merit, Meritorious Service medal (four times), Army Commendation Medal, Army Achievement Medal (twice), Toastmasters Inc. Leadership Award, induction into the San Antonio Womens Hall of Fame, and Texas Womens Forum. Before her retirement, LTC Kickbusch was the highest-ranking Hispanic woman in the Combat Support field in the United States Army.

LTC Kickbusch has produced an educational video entitled ¿Porque No  Why Not?, filmed in the same barrio in which she was born, in honor of her parents. The video has made its way to fifteen states serving as testimony that we can make our dreams come true if we follow a road map to success.

LTC Kickbusch has worked extensively with the needs of the homeless, helping communities throughout the United States and Puerto Rico, especially impoverished ones, relating her own life experiences and offering hope and motivation to the disadvantaged. In addition to her work with youth, parents and educators, LTC Kickbusch has provided encouragement and wisdom gleaned from her personal management experiences and research to managers and executives in the corporate world and government entities.