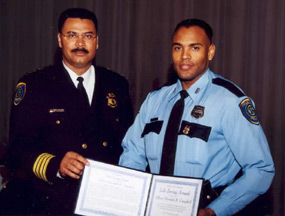 Houston Police Chief C.O.Bradford recently presented a LifeSaving Award to Northeast Patrol Officer Meredith Campbell. Officers tried to stop a vehicle traveling at a high rate of speed. The driver crashed causing the vehicle to burst into flames. Two of the occupants fled the scene but were later apprehended. A third suspect was still trapped in the burning vehicle. Officer Campbell was able to pull the victim from the wreckage saving his life.