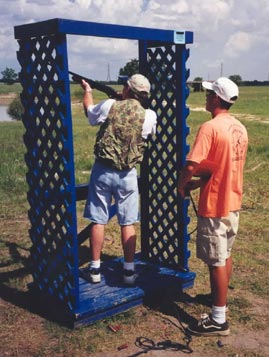 Like an old Indian scout of another era putting his ear to the ground to hear the rumble of an approaching buffalo herd, the National Shooting Sports Foundation (NSSF) is predicting a stampede of interest in the shooting sports this summer. The organization is advising the nations gun clubs and shooting facilities to prepare for a busy target shooting season.

The forecast is that more shooters will visit gun ranges and target shooting facilities this summer than ever before, fueled by an increase in first-time shooters and women participants. Bob Delfray, president of SNNF, said those shooting clubs that offer a quality recreational experience can look forward to seeing those new customers return again and again.

So, my advice to the shooting clubs and gun ranges around the area is to straighten up the welcome sign, paint the front porch, dust off the door mat, put on a pot of coffee, and get ready for lots of company.

Delfray explained that there are a number of factors that they think will lead to unprecedented attendance at shooting facilities this season. One factor is the recent trend toward family recreation. Another is the interest women have taken in shooting sports over the past few years. Participation by women in target shooting sports has increased by 80% since 1988.

Supporting NSSFs positive forecast is a recent Roper-Starch Worldwide survey, indicating that more than half of all Americans view target shooting as a popular leisure time activity. Almost 30% of those feel that shooting sports are becoming increasingly popular.

If the sale of clay targets is any indication, shotgunning is on an upward trend. Sales have been on a steady increase for the past five years to over 700 million targets per year. Thats a lot of shooting!

The largest governing body of shooting sports, the National Shooting Clays Association (NSCA) reports the number of registered targets received was up substantially from the year before. Also the number of gun clubs joining NSCA has increased.

The Roper-Starch poll also indicated there are over 67 million men and over 47 1/2 million women who have an interest in and would participate in a shooting sport if asked. The NSSF is busily reaching out to this huge potential market.

In anticipation that the number of women in the shooting sports will grow, the Womens Shooting Sports Federation (WSSF) initiated a mentor program whereby novice shooters can call them and be paired up with a volunteer mentor, male or female, who will show them the ropes. Sue King of Houston is one of the founders of WSSF.

There are many excellent shooting facilities in the Houston area. One of the largest and most popular is the American Shooting Center west of Highway 6. The ASC annually hosts numerous championship events.

Having tried my luck at hitting those speedy and elusive little clay targets, I can attest to the fact that the ASC has one of the best trap, skeet, and sporting clays courses available. As one experienced shotgunner commented to me, Shooting sporting clays is like golfing with a shotgun.
Whether you are a serious competitive shooter, trying to improve your shotgunning skills for the next bird hunting season or trying out a new and exciting outdoor sport to share with the rest of your family, all signs point to more Americans visiting area shooting ranges this year.

Shooting sports is a classic tradition that has never really gone out of style.