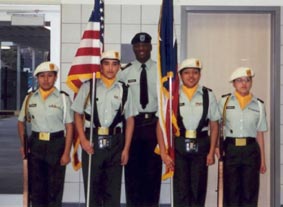 The Nimitz High School JROTC will compete at the JROTC Nationals April 5-6 in Pensacola, FL.

The cadets from Nimitz qualified for the national competition by placing fifth (out of 17 teams) at the National Qualifier held last month.

The cadets displayed awesome sportsmanship throughout the competition, Hobley said. They worked extremely hard during the year and now they are being rewarded for all of that hard work and discipline.