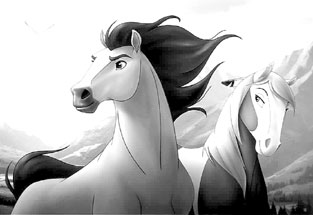 The horse hero of Spirit: Stallion of the Cimarron makes a new friend, Rain, a paint mare, in a scene from the new animated family movie.

Spirit: Stallion of the Cimarron is a visual feast for the whole family, but it will especially tickle little horse lovers.

The broad appeal of Spirit does not come from its humor like most of the recent, successful animated movies  Shrek, Toy Story and Toy Story II  but rather from its stunning panoramas of the old west and the use of a feisty horse as the hero.

Who among us did not go through a time in our lives when we were a little horse crazy? Even if youve always been a city dweller, there was probably a time when you longed to have a horse of your own.
The movie plays on the fascination that humans have with horses. A lot of movies have done this, but rarely is the story told from the point of view of the horse like it is in Spirit.

A couple of other factors make Spirit unique. For one thing, its drawn the old fashioned way, by hand. Computers generated images like those used to make the before mentioned animated movies were used in some scenes in Spirit, but most of the movie was made using the time-honored, labor-intensive method of drawing a picture for each frame of the film.

Another difference is that none of the animals in the movie speak. Thats one of the clues that this is not a Disney movie. Not that theres anything wrong with talking animals or Disney animation, its just nice that other studios like DreamWorks are making animated movies. Variety is good. If this had been a Disney film, Spirits mother would surely not have survived to the end.

The horses may not talk, but their eyes and whinnies say a lot. Plus, theres Matt Damon (Saving Private Ryan) providing narration. He starts by telling about the legend of the wild horses in the west and he explains whats happening to our hero as hes born, grows into the leader of his herd, is captured by Calvary, resists breaking, meets a young Indian and his pretty mare and tries to return home.

There arent any surprises here. The whole thing is done at a fairly brisk pace though there are some slow spots where the young ones this is geared to will get antsy. Theyll be rapt with attention during the suspenseful scenes however. The one with the waterfall is reminiscent of scenes in hundreds of other movies, but its still very exciting.

The most memorable part of the movie is when the Calvary men try to break Spirit. He outsmarts them all, even the tough Colonel voiced by James Cromwell who was the owner of Babe and next will be the president in The Sum of All Fears.

Spirit: Stallion of the Cimarron might not have the history or the hype of Star Wars, but the plot is a lot less complicated, the music is better and it sure is shorter. Almost all the songs are written and preformed by Bryan Adams. Get Off My Back sounds like its ready for lots of radio airplay. Rated-G