A Call to Wading the Summer Surf 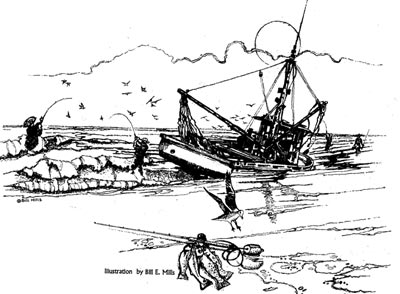 If you are considering taking the plunge and getting your feet wet to wade the summer surf, listen up. If you have heard and read a lot about it but dont consider yourself a salty surf plugger, there are a few things you need to consider before wading into Gulf waters.

A trip to the surf can provide a convenient drive-to destination without the need for a boat or guide.

The shallow surf warms up this time of year and the spring winds have diminished somewhat (usually). These favorable conditions draw legions of veteran waders as well as beginners to the shoreline. Prime surf conditions are flat, calm, and green to the beach with only a sweet southeast breeze. These elements of the surf are enough to make an old salts eyes glaze over with anticipation as he grabs his gear and heads to the Gulf.

As anybody who has ever watched for cream puff surf conditions knows, it doesnt happen often. When it does, you had better take advantage of it quickly because it never lasts long. A flat, green surf at dawn can be a rough, foam-filled chocolate surf by afternoon. Fishing is supposed to be fun. Trying to fish in a crashing surf and strong current can be plenty hard on gear, not to mention creaking knees and an aging back. Besides, I have never found trips under these conditions very successful when it comes to catching fish.

Old pros keep a sharp eye and ear on weather and water and then strike quickly when conditions are rights.

In picking out a rod and reel rig to fish the surf, choose the best one you can afford. Keeping in mind that your rig is likely to take numerous dunkings in salt water. During your trip, make sure your rod and especially your reel has a reputation for holding up in a harsh coastal environment. Some of the lesser expensive reels were never intended to hold up well in a salty and sandy surf. I prefer a long tested 6 1/2 or 7 foot graphite rod and a heavy duty Ambassadeur or Shimano open face casting reel with a smooth working drag. Many experienced surf waders prefer a slightly longer casting rod.
Of course, any rod and reel which gets repeatedly dunked in a rolling surf needs to be thoroughly rinsed with fresh water and sprayed down with a quality reel oil as soon as possible after the trip.

Because sow speckled trout and surf-running redfish come in slightly larger sizes, surf waders may want to go with slightly heavier line than the bay wade fisherman does. Instead of 10-12 pound line, many surf fishermen outfit their reels with 14 to 18 or 20 pound line. With frequent encounters with toothy predators such as Spanish mackerel and sharks, a short, flexible plastic coated wire leader is advisable to guard against line-cutting teeth.

This necessary accessory should probably head the list as far as gear for wading the surf. Not to sound grim, but a flotation vest could mean the difference between life and death. Almost every year. especially near a major wade fishing or swimming venue such as San Luis Pass, someone is swallowed up by treacherous currents. Dont chance it.

Wading vests fit more snuggly and are not as bulky as they once were. As an added advantage, a quality zip-up fishing vest has pouches and pockets for storing lures and small accessories as well as loops and rings for rigging floating bait buckets or fish stringers.

For the serious surf wader, a wading belt is a must. Ive owned several types and styles over the years, from plain nylon webbed belts to leather belts with a sheath for long nosed pliers. I found that after a few soakings in salty surf the leather became hard and brittle. The one I use now is the new Wade Aid belt. The Wade Aid is a comfortable, foam-filled belt equipped with 3-rod holders. It is not intended to be a life preserver, but it is buoyant enough to keep you afloat with a little paddling or kicking. The belt has a couple of handy d-rings, a mesh pocket and a zippered pouch for stashing small accessories or lures. A handy rod holder is ideal for carrying a back-up rod into the surf or a place to hold the butt of your rod during a re-rigging drill.

One of the surf waders best friends is a pair of long-nosed pliers to remove hooks from the mouth of a thrashing fish and to keep fingers away from hook barbs and sharp teeth. With his vehicle several hundred yards away, the surf wader must be able to remove hooks, cut lines or leaders, and re-rig hooks and lures on the spot.

I use one of the two-compartment mesh scabbards with a Velcro strap that fits on the belt and secures a pair of long-nosed pliers and a compact pair of wire or line cutters. They are both stainless steel to prevent rusting and sport rubberized handle grips. They are a multi-purpose set in one handy sheath.

In recent years, there have been several new developments in footwear with the wade fisherman in mind. One of the most popular is the neoprene zip-up wading bootie. They are lightweight and easy to remove. The most recent wading shoe to come out is the nylon mesh reef walker slipper. Some models come with a more supportive hard sole.
For many years, I wade fished wearing a pair of well-worn, low quarter lace up type tennis shoes. They served me well until I was forced to slip them out for heavy trash pick up.

The traditional floating lure hat has its share of faithful followers, but the hat also has its down side. While the wide brim offers protection from the sun, keep in mind it gives you a head full of bristling lures. An absent-minded hand to snug your hat against a Gulf wind can be a painful reminder. An errant back cast hung in your lure hat in a rolling surf can ruin your day. I speak from experience.

An option is a wide brimmed straw hat with a chinstrap. For lures, I use a compact Plano lure box that fits snugly into the pouch of my wading belt. Its just big enough to store a sampling of lures such as a couple of spoons, soft plastics, and plugs.

When outfitting yourself to venture into a rolling green surf, keep safety and comfort in mind. If you travel light and stay unecumbered as possible, you can concentrate more on fighting that wallowing speckled trout or that surf-running redfish.