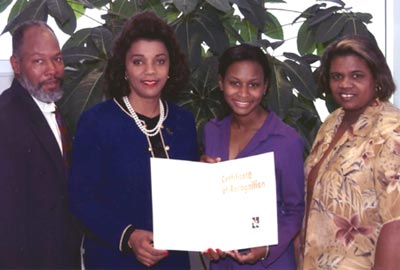 Etosha Cave has always wanted to be an engineer.
This fall she will begin her journey toward that goal as she joins the first freshman class at Franklin W. Olin College of Engineering, a new college in Needham, Massachusetts.

Im really excited about going to Olin, Cave said, because the college has an excellent faculty and a mission of redefining what an engineer is.
Its also kind of exciting to be in the very first graduating class of a college, she added.

Being named an Olin Scholar and receiving a full scholarship for all four years didnt hurt either.
However, the Booker T. Washington Valedictorian was not hurting for scholarships. She was a National Achievement Scholarship winner and received a $4,000 scholarship for being named the National Pre-College Initiatives (PCI) Student of the Year. PCI is a program created by the National Society of Black Engineers (NSBE), a collegiate organization of students in engineering schools. The largest student run organization in the nation, NSBE has over 10,000 members.

Each year the club raises money, primarily through the Annual K-family barbecue dinner, and sets a portion of it aside for scholarships to selected members of the Key Club at Booker T. Washington high school or the Circle K and Aktion clubs at Houston Community College System-Northeast College.

This year we raised $6,800 through our barbecue and other projects, noted Alex Warren, president of Sunrise Kiwanis Club, and we distributed $3,100 in scholarships. The remainder of money was or will be spent on sponsoring educational trips and age-specific learning opportunities for our sponsored club members.

Cave was a Key Club member for four years, spending her senior year as the clubs Reporter/Historian.
The Key Club is patterned after the Kiwanis Club, with a lot of emphasis on community service. she said, adding: Its a tremendous avenue to give back to the community, and thats always been important to me.

I really found my niche in the Key Club, she added, because through all the working on community service projects together, we became just like a big extended family.

In addition to the Key Club, Cave was active in a host of school activities. She also became a dual credit student her senior year. A partnership between HCCS-Northeast College and Booker T. Washington, dual credit allows students to earn both high school and college credit at the same time.

Cave earned 12 college credit hours her senior year through dual credit courses in English and Biology.
Shes adding to that total this summer by taking four credit hours in Calculus, four in Physics, and one credit each in Jazz Ensemble/violin and Improvisation at HCCS.

To find out more about the youth clubs or to join the Sunrise Kiwanis Club, which meets each Thursday morning at 6:45 at HCCS-Northeast College Pinemont Center, call 713-8804843.