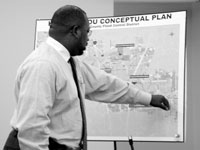 The Urban Design Committee of the Aldine Community Improvement District (ACID) met Thursday with representatives from the Harris County Flood Control District. They discussed the possibility of a partnership to create recreation areas in the Lauder Road Detention Basin.

The Lauder Road detention basin is part of a master plan to reduce area flooding. Its completion is scheduled for 2006 and will cost an estimated $5 million.

Lampley explained that dry bottom basins, like the Lauder Road project, are useable most of the year. Rather than let this land sit idle, the Flood Control District wanted partners to build recreation facilities. Lampley said, The need for recreation facilities in different parts of the city is there.

Lampley described how ACID could create design ideas that the Flood Control District would implement as they dig. We create the molds so to speak, Lampley said.

Partnership for such projects is new for the Flood Control District. Currently, they are working with the Parks Department on the Keith-Weiss Park basins. The project is estimated at $15 million dollars and will incorporate trails, fishing ponds, wading ponds, and wildlife habitats. Lampley said, Its going to be a showplace.Committee members expressed interest in a partnership. Bailey predicted that there will be a proposal at the next ACID meeting to work with the Flood Control District on the Lauder Road basin.